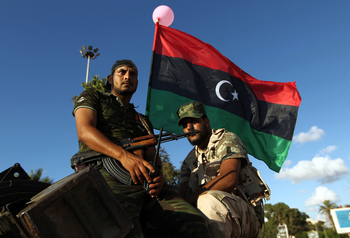 A meeting of Libyan mayors, municipal representatives and political figures Thursday in Gharian urged for unity and stressed that Libyan problems must be settled by Libyans, rejecting international interference in Libyan internal affairs.

The gathering called for domestic solutions to Libyan problems and urged all Libyans to start a reconciliation dialogue.

Members of the Tobruk-based House of Representatives (HoR), delegates of the Tripoli General National Congress, and representatives of Libyan municipalities, Tribal leaders and civil society organization as well self-style Gen. Haftar’s representatives were in attendance.

No names of the participants were released nor a tangible roadmap leading to the resolution of the problems.

While Libyans are calling for Libyan solutions to Libyan problems, UNSMIL Head Martin Kobler was in Abu Dhabi on Thursday to discuss the Libyan crisis with Emirati Minister of State for Foreign Affairs, Anwar bin Mohammed Gargash. On Wednesday he was in Doha for the same purpose.

Kobler is trying to persuade the two regional Gulf rivals to push their respective sides in the Libyan crisis to endorse the dialogue proposed solutions. The UAE is supporting the internationally recognized HoR while Qatar is backing the GNC in Tripoli.

UN efforts to broker a final agreement between rival factions have hit a wall following the recent Leongate which revealed that former UN mediator in the crisis was reportedly conspiring with Abu Dhabi to support one side in the dialogue process.

Libyans have become wary of the UN which they think is only aiming at its own interest in Libya.

In connection with these developments, 17 members of the HoR rejected this week the Government of National Accord proposed by the UN saying that such a power-sharing government will further split the country.

The 17-member group lambasted the unity government saying that the proposed names were pro-western.