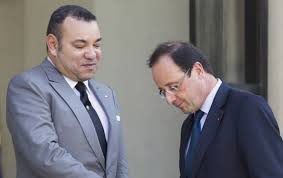 France has been targeted Friday night by a deadly terrorist attack, the second in less than a year, that left some 128 dead and 300 injured. The attacks prompted an immediate outpouring of solidarity and sympathy from around the world.

King Mohammed VI of Morocco was among the first World leaders to send a message of sympathy to French President François Hollande, expressing his country’s solidarity with France and condemning what he described as “heinous terrorist acts.”

The Moroccan King expressed his deep sorrow at “the heinous terrorist attacks that targeted several areas of Paris,” and presented “in these painful circumstances” to the French head of State, to the families of the innocent victims of these crimes and to all the French people his most sincere condolences.

“I wish also, on behalf of the Moroccan people and my own behalf, to condemn with the utmost force these heinous terrorist acts, and to express to you our full solidarity and support in this hour of grief,” said the King in his message.

He said he was confident that “the French security forces will prevail over the perpetrators of these heinous crimes,” and that “thanks to the mobilization and determination of the French people for the defense of its noble values, your friendly country will overcome this ordeal.”

The eight coordinated terrorist attacks perpetrated in central Paris Friday evening prompted the French President to decree a state of emergency throughout the country, a move that was not made since the fifties and closed its borders. He also declared that his country was at war against the Islamic State group.

The Islamic State, which had repeatedly cited in its propaganda videos France as one of its targets because of its participation in the bomb attacks against the terrorist group positions in Syria and Iraq, has claimed responsibility of the Friday carnage.