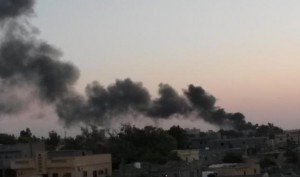 The air-strikes the second this month targeted IS fighters’ positions in former ruler Muammar Gaddafi’s hometown.

It is still unclear who was behind the military raid as neither Libya National Army (LNA,) its affiliated militias, nor Tripoli-based administration claimed responsibility of the raids.

Information from the city has been very rare since it fell in the hands of militants who have imposed their rule.

Sirte, hometown of former ruler Gaddafi was controlled by Tripoli Libya Dawn militia forces before being overrun by IS fighters. Attempts to regain the city failed amid political confusion and lack of real will by neither the Libyan army nor the Tripoli-based administration.

The country has been divided and partly controlled by two different governments and two distinctive parliaments trading accusations.

UN’s efforts to bring stability are being crippled by the Libyan internationally recognized parliament, the House of Representative (HoR) and the rival Tripoli-based parliament known as the General National Congress (GNC.) Both bodies rejected the UN-proposed power-sharing Government of National Accord unveiled on October 8, putting the Dialogue Process into jeopardy.

North Africa Post's news desk is composed of journalists and editors, who are constantly working to provide new and accurate stories to NAP readers.
NEWER POSTAlgeria-WB: Difficult to do business in Algeria
OLDER POSTMorocco’s King urges Africa to trust Africa in the pursuit of shared progress