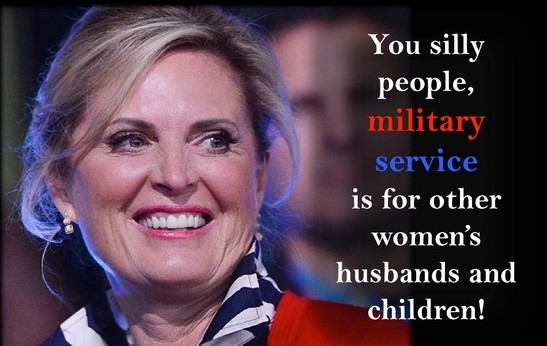 An Army of None, Ann Romney on the family’s military service

On the surface, she’s a potent weapon in Mitt Romney’s attack to unseat Barack Obama as US president. Loyal wife, doting mother and proud grandmother. But when Ann Romney speaks, there is a hint of the attitude that the heavy lifting, the dirty, dangerous jobs in America are not for her family.

During her appearance on The View television show, Mrs. Romney unwittingly gave clarity to this family doctrine. She tried to equate the Mormon mission service of Mitt, Tagg, Josh, Matt and the others with the sometimes life-threatening service in the military.

Remember that candidate Romney promises to keep the US military strong, just not with any Romneys at risk. Ann explained: “My five boys and my husband did serve missions; did not serve in the military. But the thing that I love, and I will tell you this… ” she interrrupted herself but then continued. “… You all know as mothers, when you are raising children, that one of the most selfish periods of their life is about (ages) 18, 19, 20,” chuckled Mrs. Romney, trying to warm her interviewers and the New York City studio audience.

She failed. See, Mitt Romney’s religious mission in France coincided with the Vietnam War. New Yorkers buried 4,120 Vietnam casualties, according to TheWall-USA.com. During Mr. Romney’s 30 months in France (the last six in Paris), Americans lost 33,886 soldiers, also posted on TheWall-USA.com. In all, 58,220 Americans died, according to archives.com. Not one of the healthy Romney males put on the uniform of the good ole USA. Looking for converts in France (and Costa Rica in Craig’s case), well how does that compare, Mrs. Romney?

“My five sons have also servedmissions. None served in the military, but I do have one son (Ben) that feels he is giving back to his country in a significant way where he is a doctor and he is now taking care of veterans. So, you know, we find different ways of serving,” she said to internationally-acclaimed interviewer Barbara Walters and co-hostess Whoopi Goldberg, who opened the prickly discussion.

Mitt Romney’s different way of serving? Spending 2 1/2 years in France; the closing months of it in a $12-million Paris mansion. In fact, 4 of the five Romney sons as teenagers opted for France. There, each Romney could have lamented the perils of … um … over-indulging in specialty cheeses and oven-fresh baguettes.

In Mitt’s case, from mid-1966 until late 1968, his contemporaries were guarding against something other than taking on too many calories. They were heavy in battle in the jungles of Vietnam while he was sleeping in the luxurious Mormon mansion in the 16th arrondissement of Paris. Specifically, 3 Rue de Lota.

It gets worse for the military-shucking Romney family. The voters in the states designated as swing states for the 2012 presidential election suffered mightily during the Vietnam war. TheWall-USA.com lists the numbers of deaths in Florida (1,952 American soldiers perished), Massachussetts (1,322), Michigan (2,654), Ohio (3,095), and Wisconsin (1,160). Mitt Romney was born in Michigan and led Massachusetts as governor. Is his (and his sons’) lack of military service causing a disconnect with voters? And his Janesville, Wis.-born running mate, Paul Ryan? He didn’t not serve in the military either. Forget Uncle Sam’s recruiting slogan, Army of One. Try Romneys: Army of None.

As Mormons, Romney and his five sons did not face and do not face religious prohibition from serving in the military, Mom Romney admitted on the tv show. She was on target when she used the word “selfish” again and again. She was talking about teenagers, all teenagers as she attempted to explain. Teenagers from other American families, however, answered the call of the military.
The average age of the serviceman in Vietnam was 19, said the site mrfa.org. It further said peak troop strength in Vietnam reached 543,482 in April 1969. Mitt and Ann married in March 1969.

In the end, it seems Mom Romney was talking about the Romney family experience with selfishness. This is what she saw in the home that she and Mitt created. Somehow, 543,482 other Americans (through the combination of volunteering and the draft) served their country. “They’re (teenagers) pretty selfish during that time. And my boys did serve missions and they went away for two years. I sent them away boys and they came back men. And what the difference was- and I think this is where military service is so extraordinary, too- where you literally do something where you are helping someone else. Going outside of yourself and you are working and helping others.”

“We are so grateful in this country for those people, men and women that are volunteering. (Pause for applause that did not come.) They are sacrificing their life for us and we can not forget that. We have to acknowlegde that always.” Acknowledge the example that the Romneys did not follow it.