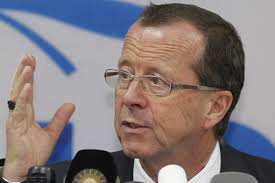 German diplomat and former head of UN’s largest peace keeping mission in DR Congo Martin Kobler is set to replace Spanish diplomat Bernardino Leon as head of the UNSMIL struggling to clinch an accord between rival Libyans, UN Chief Ban Ki-Moon announced in a letter addressed Wednesday to the UN Security Council.

Kobler, 62, joined the UN in 2010 after serving as deputy envoy to Afghanistan and later as special representative in Iraq, from 2011 to 2013.

He also served as Germany’s Ambassador to Egypt and Iraq and is known as a fluent bilingual with a good mastery of Arabic. He is also reckoned as an expert of Middle East Affairs and seen as an acceptable choice by the Libyan factions who have criticised Leon for partiality.

His appointment had been rumoured over the past months. UN Chief Ban Ki-Moon gave the members of the UN Security Council Friday as a deadline to raise any objection to the appointment.

Libyan Dialogue process expected to come to completion on October 20, has stumbled after the rival parties namely the House of Representatives (HoR) in Tobruk recognised by the international community and the General National Congress (GNC) in Tripoli rejected Leon’s proposed power-sharing government to be headed by Fayez el-Sarraj, a lawmaker member of the GNC.

Both parties feel unsatisfied with Leon’s plan leaving the process in a stalemate despite pressures from allies, friends and calls by the UN Security Council to endorse the plan so as to give hope to peace, stability and end hardship of millions of Libyan in need of humanitarian aid and unprecedented insecurity in a country left at the hands of uncontrolled militias, criminal and terrorist organisations.

Also on Wednesday, the UNSMIL urged rival camps to exercise minimum restraint in order to avoid further escalation of violence after a helicopter belonging to Tripoli government was downed by pro-Libya National Army forces on Tuesday.

“UNSMIL urges all sides to place Libya’s higher national interests above all other considerations and work towards de-escalation to spare their country and people further bloodshed and violence,’’ the statement said.

The aircraft carrying 19 people including some top officers of the Tripoli affiliated armed forces was gunned down near Zawiya, west of Tripoli.

North Africa Post's news desk is composed of journalists and editors, who are constantly working to provide new and accurate stories to NAP readers.
NEWER POSTMorocco’s King urges Africa to trust Africa in the pursuit of shared progress
OLDER POSTMorocco, Powerhouse of Africa, Teams Up with India for Building Strategic Partnership