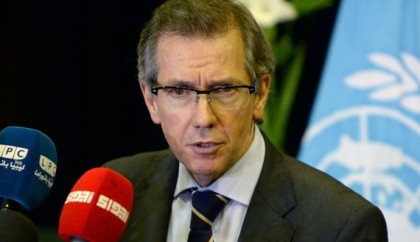 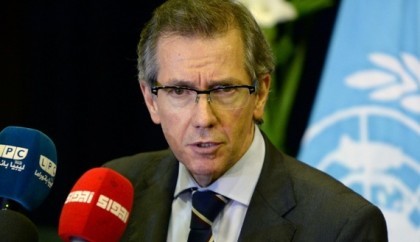 UNSMIL Chief Bernardino Leon took off Monday to Egypt to seek the Arab League’s support in bringing the Libyan Political Dialogue out of deadlock.

The Arab League is backing the Libyan internationally recognised government and its Tobruk-based Parliament, the House of Representatives (HoR.)

Leon hopes that the Arab League can convince the HoR to endorse the UN proposed unity government and the peace roadmap. The HoR last week rejected Leon’s peace plan pointing out that it is disadvantageous to the Libyan people.

Following the rejection of the UN roadmap, HoR President Ageela Saleh Gwaider paid visits to Cairo and Dubai in an attempt to win their support for the house’s standpoint.

Unconfirmed reports indicated that Leon may meet with Gwaider in Cairo.

According to some press reports, political dialogue protagonists will again convene in the Moroccan resort city of Skhirat, most likely on Thursday, in an attempt to lift up roadblocks for the endorsement of the UN plan.

Last week, Leon vowed to continue talks in order to bring all parties to a consensus even though strong voices against his proposed unity government are trying to jeopardise the process. The UN diplomat said the majority of Libyans including majorities from cross rival sides are in favour of the UN peace roadmap.

Leon’s proposed Libyan Government of National Accord (GNA) received a major boost on Monday from the National Movement for the Tuaregs (NMT) which announced its support to GNA as “the only solution to Libya’s crisis.”