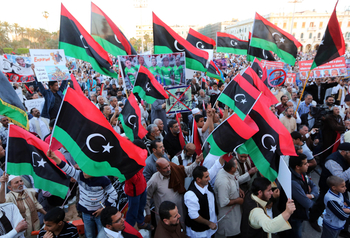 Dissidents from rival parties in the Libyan crisis Thursday called for the endorsement of the UN-suggested Government of National Accord and Peace deal days after their main bodies rejected the UN plan.

A group of 21 dissident lawmakers of the Libyan internationally recognised Parliament; the House of Representatives (HoR,) issued a statement on Thursday calling on HoR to endorse the UN plan, the Government of National Accord unveiled by UNSMIL Chief Leon on October 8.

The group also called on Libyans to go to the streets to press the Libyan internationally recognised government to approve the deal.

The breakaway group distances itself from HoR which early this week brushed off the UN-proposed Peace deal.

The group also endorsed the designation of Faiez Al-Serraj as Libya’s future Prime Minister and as the only official entitled to approve the nomination of the 17 Libyans proposed for ministerial portfolios by Leon.

In the camp of the General National Congress in Tripoli, dissident members who regrouped themselves under the banner of National Accord Bloc also came in support of the UN-proposed Peace deal.

The GNC rejected Leon’s proposed unity government saying that they were not consulted. The GNC did not officially participate in the final steps of the dialogue and demanded additional amendments. The amendments were turned down by Leon.

The Justice and Construction Party and other leading figures linked to the Libya Dawn in Tripoli, among whom Abu Qassem Igzeit from Misrata, have also called for approving the final document.

On Wednesday, UNSMIL Chief Leon said, in press conference in Tunis, the Dialogue process will continue and that they will not surrender to a minority seeking to foil the Peace process.

Leon also indicated that he had names of people on both sides backing up the UN roadmap. The UN diplomat added that some 70 members of HoR and 70 other from GNC were in favour of the final document.

Leon went on saying that they will continue talks with different parties inside and outside the process even though October 20 deadline had passed.

North Africa Post's news desk is composed of journalists and editors, who are constantly working to provide new and accurate stories to NAP readers.
NEWER POSTAlgeria’s Trade Deficit Worsens to Over $ 10 billion
OLDER POSTTunisia: IS can round up 20, 000 fighters if it wants to attack Tunisia, Expert