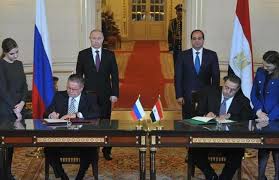 Egyptian authorities are negotiating with Russian Company Rosatom for the construction of a nuclear power plant to enable the most populous country in the Arab world meet its growing energy demands.

Talks are believed to be at their final stages and a deal is expected to be sealed by the end of 2015, according to press reports.

The nuclear power plant will be constructed in Egypt’s northern region of Dabaa. The plant will have four reactors when completed by 2022.

Egypt had suspended its nuclear program after the 1986 nuclear disaster at Chernobyl, but revived it few years later. Plans for a tender were being prepared when President Hosni Mubarak was ousted in the February 2011 popular uprising.

Early this year, President Abdel Fattah al-Sisi signed a memorandum of understanding with Russia for the project, stressing the importance of diversifying energy mix.

The deal is very important for Russian state-owned Rosatom firm because Egypt is traditionally an ally of the United States. The Dabaa project will enable Rosatom enhance and expand its presence in the region. The Russian company is already actively cooperating with other countries in the Middle East.

In September 2014, the company signed an agreement with Jordan to build two nuclear power plants in the province of Zarqa, with a total capacity of 2,000 MW.

The Saudis are planning to generate 17 gigawatts (GW) from nuclear power by 2032 and around 41 GW from solar energy.