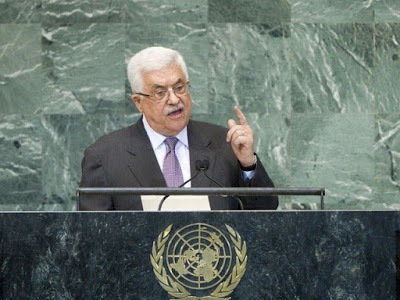 The Palestinian President’s Wednesday speech at the UN revived thousands of Palestinians’ hope to establish a Palestinian state especially that the day marked the hoisting of their flag for the first time at the UN.

“Palestine, which is an observer state in the United Nations, deserves full recognition and full membership,” Abbas said.

“In this historical moment, I say to my people everywhere: raise the flag of Palestine very high because it is the symbol of our identity,” he continued.

Mahmoud Abbas’s emotional speech was followed by thousands of Palestinians in front of large screens mounted for the occasion in Ramallah, Jenin and Hebron. The crowd waved the Palestinian flag as he spoke and dozens of Palestinians paraded through the streets while firing shots in the air.

Abass’ speech revived Palestinians’ hope to see, one day, their nation as a full-fledged member of the international community like Israel.

The Secretary General of the Palestinian presidency, Tayeb Abdel Rahim hailed the President’s address which, he said, expressed the boiling feelings of all Palestinians.

Even though speech was openly accepted there are still mixed feelings among Palestinians. Some Palestinians including Hamas in Gaza are still doubtful and are waiting to see the impact of such speech on Palestinians’ conditions and the reaction of the world in making the Palestinian statehood dream come true.

After the speech, Abbas hoisted for the first time the Palestinian flag at the UN seat. The Palestinians’ request to hoist their flag was adopted this month by the UN with some EU countries backing the resolution. Israel and the United States voted against the draft resolution.