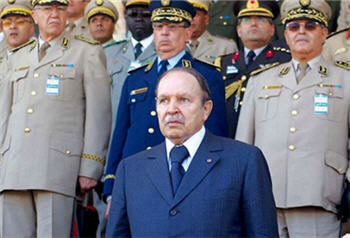 The power struggle raging in the North African country of Algeria is nowhere near over yet. On the contrary the showdown between presidency inner circles and military intelligence apparatus, which was brewing underneath, is now getting more serious and alarming after General Mohamed Mediene, or as he is more commonly known General Taoufik, was summarily sacked on Sunday.

A laconic presidential communiqué said “The president of the republic, Abdelaziz Bouteflika, has ended the duties of the chief of the Department of Intelligence and Security, and replaced him with Maj.Gen. Athmane Tartag.”

Everybody knew that President Bouteflika had started cleaning up his backyard in 2013 and has recently sacked several top brass to curb the power of the DRS military intelligence service which has long influenced politics from behind the scenes. Yet, nobody could predict that the following name on the list of the unwanted persons would be General Taoufik, one of the world’s longest serving spy chiefs.

The news was stunning not only to analysts but also to the Algerian people which is often more concerned by the country’s economy, badly hit by the falling oil prices, rather than by the blurry situation heating up at the top of the State.

But the sacking of the mysterious man who influenced Algeria’s politics for 25 years and who had easy access to all security forces, to the media and to the business circles was quite a shock.

The man is said to have been among a number of top officers who played a crucial role to help the North African country emerge from the longest, bloodiest and darkest civil wars against the Islamists. The war flared up after elections won by the Islamic salvation Front (FIS) in the early 90s were cancelled by authorities to block the Islamist party’s route to power.

Dismissing one of the figures of the fight against extremist groups might therefore seem surprising, all the more so as the country is still challenged by radical groups stemming from Al-Qaeda and groups having vowed allegiance to the Islamic State.

As stated in a study by the Jamestown Foundation, “Algeria is now home to various competing, and sometimes overlapping, jihadist groups that are not only locked in a battle with the Algerian government, which they regard as an apostate or tyrant entity, but also to different degrees with each other, in an internecine competition for media attention, funding and recruits.” So, the battle against terror is far from being over.

Yet, some analysts sensed months ago that the President and his inner circles were seriously bothered by the DRS and its many powers that included the right to carry out judicial probes into corruption. A sensitive issue since the corruption epidemic affects the ruling elite from bottom to top as well as all parts of the Algerian state with its army, administration, police etc…

Over the past 18 months, the President started eroding the DRS powers and transferred some of its responsibilities to the army.

Several Generals were fired including the head of presidential security and the director of internal security. Both men were working under DRS chief General Mohamed Mediene. The duties and missions of the dismissed Generals have been transferred to chief of staff and Deputy Defense Minister General Ahmed Gaed Salah, one of Bouteflika’s closest allies.

According to foreign press report, the DRS unit in charge of economic intelligence was also closed down, while the national center for surveillance was put under the authority of the chief of staff.

The Algerian authorities have also arrested Abdelkader Ait Ouradi, a former DRS counter-terrorism chief. Also known as General Hassan, he was for a decade director of the SCORAT counter-terrorism center, in charge of the fight against armed groups in Algeria.

The uncertainty about the President’s capacity to rule the country and the prospects of his succession that might ignite a dangerous battle are also put forward by some pundits among the reasons behind the infighting tearing apart the various corrupt oligarchic clans and the purge operated at the DRS.

Though re-elected last year to a fourth term, Bouteflika, 78, has rarely been seen in public since recovering from a stroke in 2013, fueling speculations in local and international media over his ability to serve out his mandate, which ends in 2019.

And according to analysts, although the relationship between the DRS chief and Bouteflika’s clan has never been that smooth, the President’s anger at him was exacerbated when General Mediene opposed Bouteflika’s running for a fourth presidential term. Bouteflika’ s enmity has been growing since that time, kindled by the president’s clique. This clique wants General Taoufik out of the way to have the necessary leeway to choose a successor to Bouteflika without any dissonant voice.

These swift changes have sounded the alarm bell in Washington, Paris and many others western capitals as Algeria has become an important player in the fight against terrorism.

Besides, there is a regional and international concern that power struggle unfolding in Algeria may lead to a fresh upsurge of violence giving way to the Islamists’ comeback.

As the political and economic crisis deepens in the oil-rich nation, fears continue to grow over stability in Algeria and spill-over to neighboring countries.