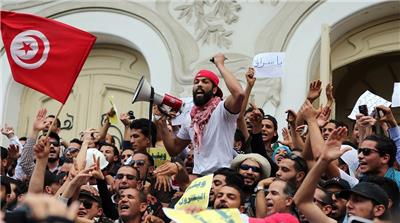 Five Tunisian parties decided to form a national coordination committee to pressure the government to withdraw and review the controversial Economic Reconciliation bill.

The decision by the 5 Tunisian parties, namely Al-Jamhouri, Ettakattol, the Democratic Alliance, the Democratic Current and Echaab Movement, was made at a meeting on Friday.

They have also decided to stage a national march in Tunis on September 13 with the hope of gathering support from all the regions. The Popular Front didn’t attend the meeting because it deems it too early. Tensions over the bill have been slowly rising and those opposed to it believe that it will lead to the return of corruption into the system if approved but the government thinks that forgoing sanctions to those who reveal how they amassed their ill-gotten wealth will help boost the economy.

Secretary General Maya Jribi of Al-Jamhouri party told the press that the “partisan alliance” will collaborate with other parties and organizations against the reconciliation bill and money laundering. Following clashes between protesters and security officials during the week, Jribi said “the emergency state should be devoted to the fight against terrorism and not against liberties.”

The spokesman of the five-party coalition, Issam Chebbi, said the bill is “undermining Tunisians’ national unity” and called for more mobilization against it.

Prime Minister Essid had a meeting with his adviser Taoufik Rajhi who is also heading the supervision of the Board of Economic Analysis. Rajhi told the media that “the economic situation in Tunisia is difficult especially as the economy goes through a technical recession” citing that investment, completion of public projects and the reduction of social claims should be promoted.