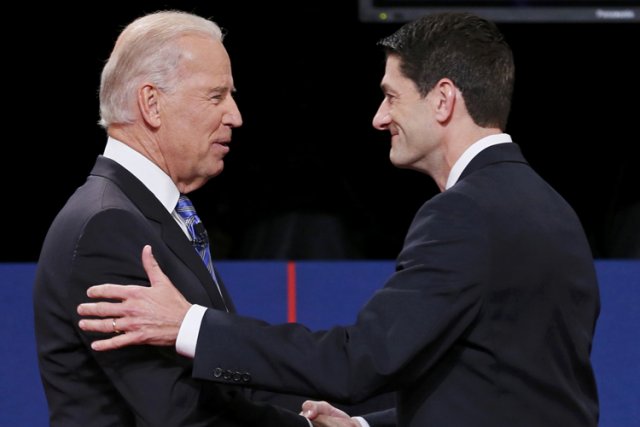 What muzzle did US Vice President Joe Biden agree to wear in the veep debate against Rep. Paul Ryan, the runningmate of Republican Mitt Romney? Pres. Barack Obama appeared to be muzzled also during his appearance with Mr. Romney in Denver 8 days earlier. Why the word “muzzle?”

The incumbents and the hopefuls for the highest offices in the world know they must not utter the forbidden words. An under-the-table agreement rules all. That secret document scrubs away the controversial topics and restricts the words which can be said. It clears away whatever could actually show something to the American voters.
“Because, if the candidates were forced to be confrontational, if the candidates were forced to engage in spontaneous discourse, if the candidates were forced to confront issues they were uncomfortable with, they might make a mistake,” said George Farah, the antitrust attorney who is behind a push to open up presidential debates to more candidates. His group also wants the Memorandum of Understanding between the two camps and the Commission on Presidential Debates to be released to voters.
Leading up to the veep event, I wondered how soon Mr. Biden would attack Mr. Ryan’s admiration of atheist Ayn Rand. A recent skit by comedian Stephen Colbert revealed the cold and brutal positions of the writer, Ms. Rand. For many years, Mr. Ryan fell in line as her disciple, according to Mr. Ryan’s own words.
“I grew up reading Ayn Rand and it taught me quite a bit about who I am and what my value systems are, and what my beliefs are. It’s inspired me so much that it’s required reading in my office for all my interns. “ Paul Ryan / The 2005 Atlas Shrugged Society Celebration of Ayn Rand
Further, a video with “RyanForCongress.com” stamped in the upper left-hand corner said:
“Ayn Rand more than any one else did a fantastic job of explaining the morality of capitalism. And this to me is what matters most.”
What could be the reason that the sitting veep did not call out this atheist philosophy? Mr. Colbert did it as a memorable punchline. Good comedy makes good debate zingers. “You can see the Randian influence in Paul Ryan’s own work, the Republican budget. (chuckle, chuckle, snort, snort) Just as readable as Atlas Shrugged, he rewards job creators by cutting their taxes and teaches self-reliance by cutting health insurance to parasites.
More from Mr. Colbert:
“… But just because Paul Ryan got into politics because of Ayn Rand and requires interns to read her and uses her philosophy in his budget doesn’t mean he likes her.”
Roll tape of the Ryan retraction, which Mr. Colbert also played. “I really enjoyed her novels, Atlas Shrugged in particular. It triggered my interest in economics. Later I learned about what her philosophy was; it’s called Objectivism. It’s something I completely disagree with. It’s an atheistic philosophy. Those novels were interesting. But her philosophy, which is quite a bit different, is something I just don’t agree with.”
Mr. Colbert ridiculed him further.
“I mean, he didn’t see the atheism buried in such coded language as “ .. that dark, incoherent passion within you, which you take as the voice of God … is nothing more than the corpse of your mind.” – Ayn Rand, Atlas Shrugged
The purpuse in trotting out the Ayn Rand lecture and her anti-God posture is to say that American voters would like to know the religious leanings of their potential president and vice president. Not hearing her name confirmed the depth of control the debate master has over the candidates. There really must be the don’t-go-there list of words and topics. The CPD is still standing firm and not publishing the debate rules. Who is served by that protection, by the withholding information? The major party candidates, the status quo.

“This current system resembles authoritarian governments more than other western governments, such as Canada and France.”

“It is not uncommon for five, six, even seven candidates to take the stage. Those countries do not just survive the clashes, they thrive—with higher levels of political engagement than the United States has seen in decades,” according to CommonDreams.org.
Billionaire Ross Perot bought his own way into presidential politics 20 years ago. He spent $63 million of his own fortune, explained authors Herbert Alexander and Anthony Corrado in Financing the 1992 Election. But what was the effect? He spoke the unspoken, you know, that someday America would back away from empire building. Neither incumbent George H.W. Bush nor challenger Bill Clinton would float that idea and risk turning off the military-industrial complex.
Said Mr. Perot: “We cannot be the policeman for the world any longer. We spent $300 billion/year defending the world. Germany and Japan spent around $30 billion apiece. If I can get you to defend me and I can spend all my money on industry, that’s a homerun for me.” The businessman was prophetic. Japan and Germany took their turns at flourishing.
Mr. Perot earned 19.7 million votes by dressing down the Big Lobby culprits and asking Americans to grab back their responsibility. “You own this country, but you have no voice in it the way it’s organized now … Why shouldn’t you get what you want as opposed to some lobbyist who cuts the deal, writes the piece in the law and it goes through?” he pleaded during the 1992 debate.