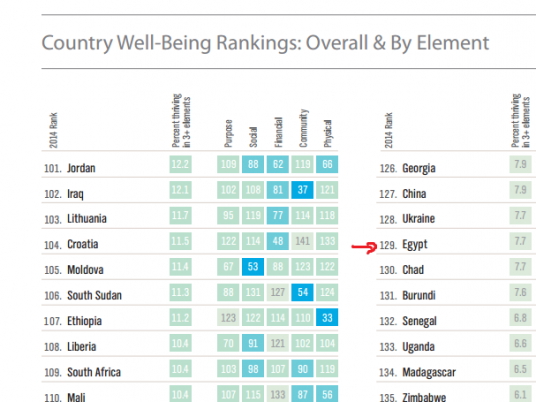 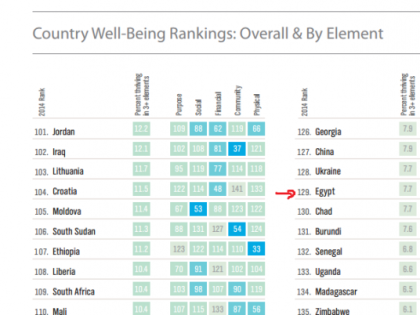 The 2014 report of populations’ well-being indicates that Egypt has slid into a country with no hope and acute economic stress according the Gallup Center on Wednesday.

Egypt ranks 129th among 145 countries covered by the 2014 State Well-Being Rankings Report. Egypt is ranking below war-torn Iraq and Yemen.

Panama ranks top of Well Being countries while Afghanistan lags between as the bottom of the chart. The US ranks 23rd falling from its 12th position on the 2013 ranking. Morocco ranks 90th.

The Well-Being Index includes more than 2.1 million surveys and captures how people feel about and experience their daily lives.

Levels of well-being correlate with healthcare (utilization and cost) and productivity measures (absenteeism, presenteeism and job performance), all critical to organizational and economic competitiveness.

The interviews with adults conducted in 145 countries between January 1, 2014 and December 31, 2014 include other factors such as people’s motivation to pursue their goals and how they overcome economic stress.

The Center also revealed that the same survey conducted on social networks proved that people are discontent with their social situations.

Also the Center argued that people with higher well-being have higher productivity, lower health-care costs, are more resilient in the face of challenges  and more likely to contribute to the success of their organizations and communities.