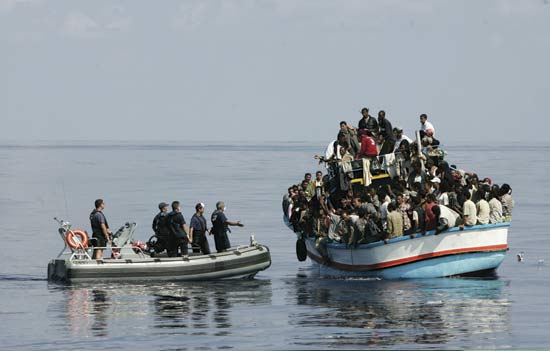 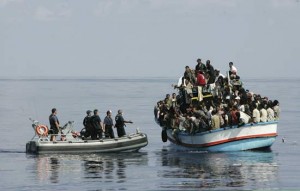 Several international experts, intellectuals and human rights activists are wondering whether the idea of setting up a task force to fight the upsurge of illegal immigration will ever work?.
The proposed task force, to include delegates or agents from North Africa (Algeria, Libya, Morocco, Mauritania & Tunisia) and their European partners (France, Italy, Malta, Portugal & Spain), was approved during the 5+5 summit held lately in Malta.
The summiteers discussed common social and economic challenging issues emerging from the Arab Spring. They stressed the importance of strengthened co-operation between both sides of the Mediterranean basin in dealing with the pressing and dramatic issues of illegal immigration.
The Malta conference was held amid growing European fears that ongoing unrest in the southern shore of the Mediterranean region would led to waves of illegal immigrants from North Africa to Europe.
Despite their differences and shared legacy, leaders of this geostrategic region were convinced that the issue of illegal immigration should be tackled within the frame of a comprehensive and coordinated approach associating all Mediterranean countries.
It is clear that clandestine migration cannot be managed purely through security measures such as tightening borders security and control besides repatriation of those who managed to get into Europe. The immigrants often risk their lives in their attempts to reach the northern shores of the Mediterranean Sea, using makeshift boats. Most of them die during their perilous journey. It is really a human tragedy because behind every person who tried to sneak into Europe through illicit means there was a story of great suffering.
To make the Mediterranean basin a haven of stability, security and prosperity, North African and European countries should pool their efforts in a bid to resolve the fundamental causes of illegal migration which must not be handled as a security operation but rather as a humanitarian one, a broader goal that can be carried out within the frame of Euro-Mediterranean solidarity and co-developments.

North Africa Post's news desk is composed of journalists and editors, who are constantly working to provide new and accurate stories to NAP readers.
NEWER POSTAlgeria to Invest US$71 Billion in Energy Sector by 2017
OLDER POSTMauritania: Gas production in Banda field May Start in Late 2014