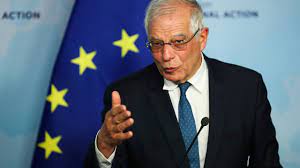 The European Union has urged Rwanda to stop supporting the M23 rebel group, which has captured swaths of territory in the North Kivu province of neighboring Democratic Republic of Congo (DRC).

Rwanda must “stop supporting the M23 and use all means to press the M23 to comply with the decisions taken by the EAC (East African Community)” and at a November summit in Angola, EU foreign policy chief Josep Borrell said.

His comments came after United Nations experts’ report found ‘direct intervention’ by Rwandan forces inside the DRC. The DRC, along with the United States and several European countries, has repeatedly accused its smaller central African neighbor of backing the M23, although Kigali denies the charge. The Tutsi rebel group has in recent months advanced to within a few dozen kilometers of provincial capital Goma.

The EU “also firmly urges all states of the region to prevent the provision of any support to armed groups active in the DRC,” Borrell added. He called on Kinshasa to “take all measures necessary to protect the civilian population in its territory”.

Under heavy international pressure to disarm, M23 joined a ceremony last week to deliver the strategic town of Kibumba to an East African military force as a “goodwill gesture” for peace.

The EAC also said the group had to withdraw to the border between the DRC, Uganda and Rwanda. However, the Congolese army promptly dubbed the Kibumba handover a “sham.”