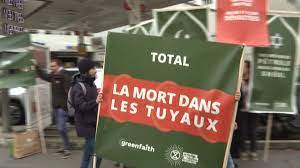 About thirty protestors gathered in front of a TotalEnergies gas station in the south of Paris, carrying banners with slogans such as “Deliver Us From Total“ or “Warm Hearts, Not Pipelines“. Some religious figures arrived carrying an empty coffin with African landscapes painted on it. Extinction Rebellion Spiritualities is a branch of the Extinction Rebellion movement, well known for its civil disobedience actions. Green Faith is an inter-religious NGO born in the United States which fights “for climate justice”, supported by religious volunteers. The NGOs accuse the multinational of taking over land through expropriation and are concerned about the environmental impact of these projects.

TotalEnergies has been sued by several environmental NGOs over its activities in Uganda and Tanzania. The company will appear before the Paris Court of Justice on December 7 to discuss the matter. The associations are targeting two colossal projects that are intrinsically linked: the Tilenga project, a 419-well drilling project in Uganda, one-third of which is in the Murchison Falls natural park; and the EACOP project, the world’s longest heated oil pipeline, which crosses Tanzania over nearly 1,500 km, crossing several protected natural areas.

TotalEnergies reacted in a press release, stressing that its projects “represent a major development challenge for Uganda and Tanzania and we are doing everything possible to make them exemplary in terms of transparency, shared prosperity, economic and social progress, sustainable development, environmental awareness and respect for human rights.”