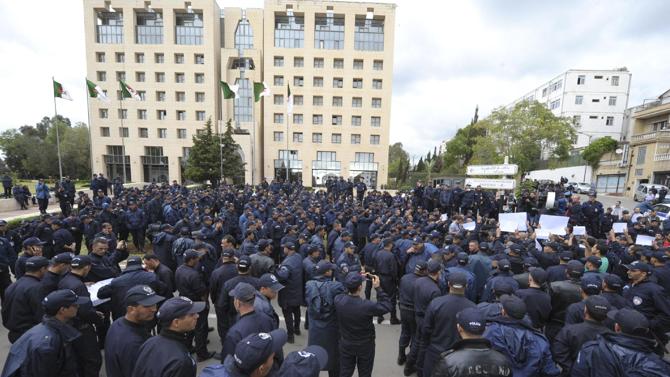 The protest of hundreds of security forces is heading for its third day as their demands continue to be unanswered. They camped outside of the President’s headquarters after failed attempts to force their way in. The protesting security forces are demanding to meet with the Prime Minister for talks.

The protests of the security officers started on Tuesday as a solidarity march with thousands of their colleagues sent to the southern city of Ghardaia where clashes between Arabs and Berbers erupted on Monday. Some of the police officers have been injured in the clashes which have already left two civilians dead and several shops ablaze. Demonstrations by security forces are very rare in Algeria although civilian protests for jobs, housing and pay are often frequent.

On Wednesday, the police insisted on seeing the Prime Minister when they stormed the President’s headquarters. President Bouteflika has made very rare public appearances after receiving treatment from a minor stroke. The appearance of the President’s Chief of Staff, Ahmed Ouyahia, was met with boos and hisses when he made efforts to talk to the protesting officers.

Sociologist Nacer Djabi linked the protests to the “vacuum of power” the country is facing.

The officers seem to be unhappy about the way security officers are being treated as they chanted for the departure of the head of the country’s security forces General Abdelghani Hamel. They are also demanding better working conditions, salaries doubled and easier access to social housing. One of the officers at the protest lamented about their working conditions. “We’re under too much pressure, it’s 48 hours (shift) without a break each time, it’s too much pressure,” he said.

It is still unclear how long the protests of the unarmed security officers will last.