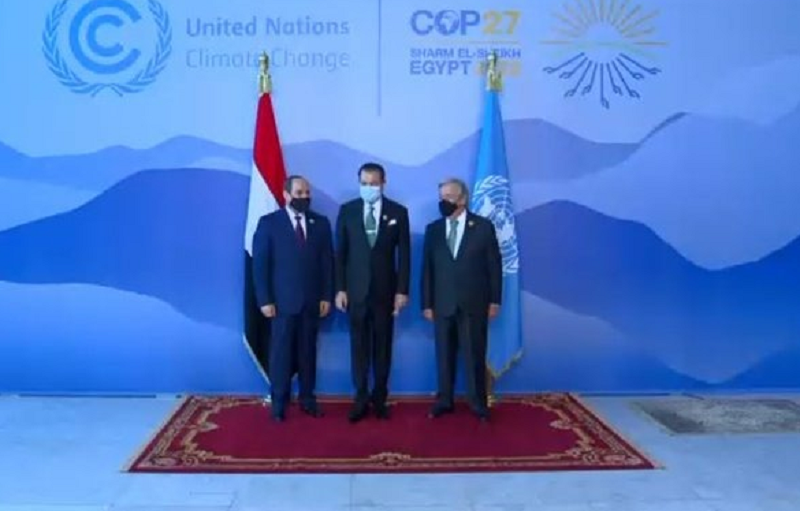 Morocco’s Prince Moulay Rachid is representing King Mohammed VI at COP-27 Climate summit which opened Monday in Sharm El Sheikh, Egypt, to discuss global efforts to reduce CO2 emissions and speed up transition from fossil fuels to green economy.
On his arrival at the International Conference Centre, Prince Moulay Rachid was greeted on a red carpet by Egyptian President Abdelfattah Al-Sissi and UN Secretary General António Guterres before posing for a “family photo” at the event.
In his opening address, Al-Sisi called on world leaders to act with urgency to implement their commitments. “There is no time to slip back. There is no space for hesitation,” he said, stressing that “for the sake of future generations, here and now we are facing a unique historical moment, a last chance to meet our responsibilities.”
UN Chief said the loss and damage caused by global warming “can no longer be swept under the rug”, warning that “we are on highway to climate hell”
“Greenhouse gas emissions keep growing, global temperatures keep rising, and our planet is fast approaching the tipping point that will make climate chaos irreversible”, he added, calling for a universal early warning system within five years and urging governments to tax the windfall profits of fossil fuels companies.
According to a list posted by the United Nations, 110 heads of state and government are expected to address the UN Climate Change conference.