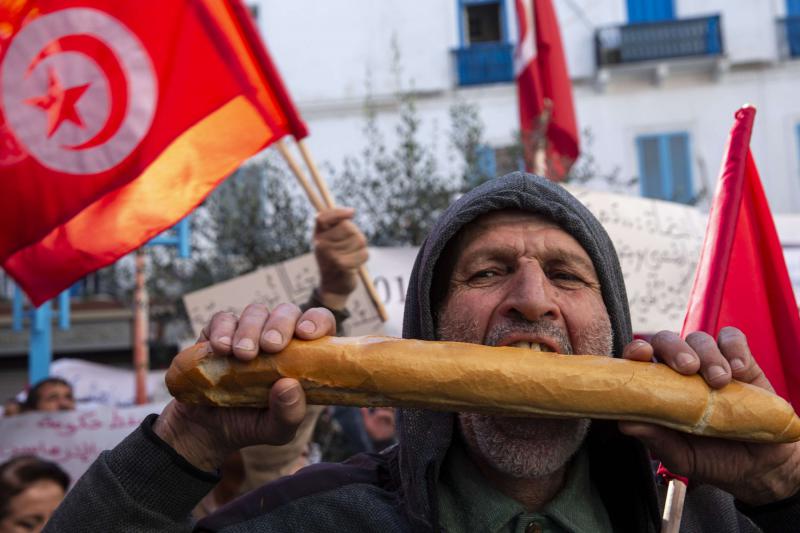 The rising inflation and the shortages of vital foodstuff in supermarkets pushed thousands of Tunisians to take to the streets, waving bread loaves in an expression of frustration over the worsening poverty in the country.

Shortages of sugar, coffee, butter, cooking oil, rice flour, fuel and other basic commodities triggered unrest in many cities including in the capital, where hundreds chanted slogans denouncing corruption of the ruling elites.

Protesters burned tires while others shouted “Jobs, freedom and national dignity”, “we can’t support crazy price hikes”, and “where is the sugar?”

Images abound on social media showing empty shelves while a video went viral wherein Tunisians scramble for small bags of sugar, a commodity that has been lacking in Tunisian markets for weeks.

The protests were fueled by a 14% increase in the prices of cooking gas cylinders, a move that reflects the burdened public spending on subsidies.

Just like in its donor Algeria, queues have become a new normal in Tunisia, a country on the brink of financial collapse.

Analysts say the shortages serve as a warning sign of an impending economic collapse as Tunisian companies lack liquidity and foreign suppliers are increasingly unsure about the payment of their deliveries.

The unrest augurs ill for the Tunisian autocratic presidency which braces for more measures that are likely to stoke public anger. The IMF has conditioned a lifeline to the Tunisian economy with reforms including cutting the public wage bill and subsidies, measures that are fiercely opposed by the major labor unions.