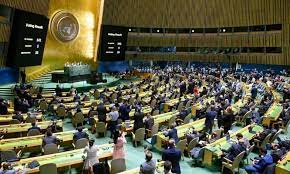 Gambia’s President Adama Barrow has reiterated at the United Nations his country’s strong support for Morocco’s autonomy plan offered for a lasting and peaceful resolution of the Sahara regional conflict.

In his speech made Thursday at the ongoing 77th session of UN General Assembly convening in New York, Mr. Barrow said the Government of Gambia reaffirms its strong support for the Moroccan Autonomy Initiative, which offers a realistic compromise in accordance with UN resolutions for the settlement of the Sahara dispute.

He also called on the international community to support Morocco’s sovereignty and territorial integrity.

For his part, the President of the Comoro Islands Azali Assoumani has expressed at the UNGA unwavering backing to Morocco’s full sovereignty over its entire Saharan territory.

“I would like to reiterate the firm support of the Union of the Comoros for the Moroccanness of the Sahara,” he said, describing the autonomy initiative proposed by Morocco for the Sahara under its sovereignty as “the best basis to reach a rapid, pragmatic and lasting solution” to this regional conflict.

President Azali Assoumani said his country encourages dialogue between Morocco and Algeria, and welcomes all initiatives that could help to bring in peace to this region and re-launch of the UN-led political process on the basis of UN Security Council resolutions.

The Moroccan delegation, attending the 77th session of the UNGA, has responded to the false allegations made by Algerian delegate on the Sahara issue in a bid to mislead the international community and dodge Algiers responsibility and involvement in this regional dispute.

Algeria created the “polisario” armed separatist group. It hosts it on its territory, finances it generously, provides it with weapons and supports it diplomatically, said the Moroccan the delegation.

The Moroccan delegation also affirmed the referendum option has been buried definitely by the UN Security Council which calls, henceforth, for a political, realistic, pragmatic and lasting solution that is offered by the Moroccan autonomy initiative.