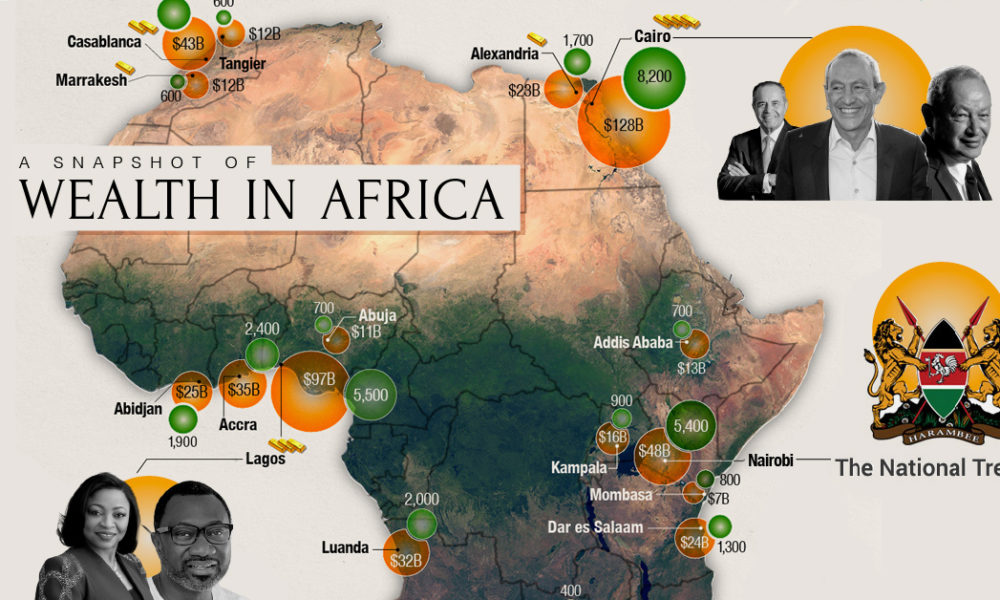 South Africa, Egypt, Nigeria, Morocco, and Kenya are Africa’s wealthiest countries. The first three countries possess US$651 billion, US$307 billion, and US$228 billion in private wealth, respectively, accounting for US$1.18 trillion, or 56% of Africa’s total wealth of US$2.1 trillion.

Morocco and Kenya close the top five list in the continent with total private wealth worth $125 billion and $91 billion, respectively. “Wealth” measures the value of all the assets of worth owned by a person, community, company, or country and this differs from “gross domestic product” (GDP), a monetary measure of the market value of all goods and services produced in a country during a specific period.

The approximate number of people with net assets of $1 million or more (or what the survey calls high net worth individuals) living in Africa is 136,000 but those whose assets are worth more than $10 million number 6,700. Only 305 Africans own private property worth at least $100 million with the continent only having 21 dollar billionaires. The top five cities where most dollar millionaires live are Johannesburg, Cairo, Cape Town, Lagos, and Nairobi at 16,000, 8,200, 6,900, 5,500 and 5,400 respectively.

Mauritius, with the highest wealth per capita in Africa of US$34,500, has been “the fastest growing wealth market in Africa in percentage growth terms, with growth of 74% between 2011 and 2021.” The report has also found that “South Africa is home to the largest luxury market in Africa by revenue, followed by Kenya and then Morocco.”