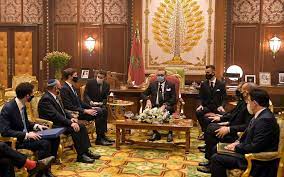 U.S. Secretary of State Antony Blinken has hailed the “transformational changes” generated by the Abraham Accords brokered by the U.S. for the normalization of relations between Israel, Morocco, the UAE and Bahrain.

In a press release issued Thursday by the State Department, Mr. Blinken said: “this week, we celebrate the two-year anniversary of the signing of the Abraham Accords and normalization agreements”.

“These steps (…) have led to new forms of cooperation and regional integration in the Middle East and beyond, including the historic Negev Forum, which brought us together with Israel and its neighbors”, said the U.S Secretary.

“We are committed to advancing and expanding upon these agreements between Israel and Arab and Muslim-majority countries to enhance regional security, prosperity, and peace”, he added, affirming that “the United States looks forward to helping strengthen and deepen these partnerships in the years to come”.

In his twitter account, Mr. Blinken said the United States will continue to “strongly support a process that is transforming the Middle East and beyond”.