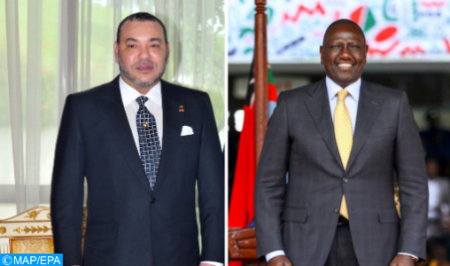 Kenya rescinds its recognition of pseudo-SADR, will end its presence in the country

Kenya has announced this Wednesday its decision to rescind its recognition of the pseudo-Sahrawi Republic, self-proclaimed by the Algeria-backed separatist polisario front.

The newly-sworn President of kenya William Samoei Ruto announced that his country rescinds its recognition of the SADR when receiving this Wednesday, September 14, 2022, in Nairobi, the Moroccan Minister of Foreign Affairs, Nasser Bourita, who handed him a congratulations message from King Mohammed VI on the occasion of his inauguration.

Kenya will also initiate steps to wind down the entity’s presence in the country, said a joint statement released after the audience and posted on the website of the State House.

“Kenya supports the United Nations framework as the exclusive mechanism to achieve a lasting and permanent political solution to the dispute over the Sahara issue,” the statement added.

In his message, King Mohammed VI congratulated Mr. William Samoei Ruto on his election as the 5th President of Kenya and welcomed the successful unfolding of democratic elections in the country in August 2022, stressing that these deadlines consolidate the position of Kenya as a beacon country in terms of democracy at the continental level.

The Sovereign also welcomed the promise made by the Kenyan President to strengthen and deepen the current bilateral relations between his country and various states in Africa and elsewhere.

President Ruto, for his part, hailed the leadership of King Mohammed VI in promoting policies of tolerance at the level of the Maghreb region, as well as its contribution to world peace and security.
He also expressed his willingness and commitment to work with the Sovereign to strengthen relations between the two countries, which are both committed to raising their bilateral diplomatic relations to the level of strategic partnership in the coming six months, the statement said, adding that the Republic of Kenya is committed to opening its Embassy in Rabat.

Similarly, it was agreed to immediately accelerate economic, trade and social relations between the two countries, particularly in the areas of fishing, agriculture and food security (import of fertilizers).

Being one of the greatest African powers, particularly in East Africa, Kenya, is currently a non-permanent member of the UN Security Council, which is preparing to vote on October 27 on a resolution on the Sahara issue.

The decision made by Kenya, which had been among the supporters of the Polisario, is therefore important in more than one way. It corroborates the momentum of breakthroughs scored by Moroccan diplomacy and deals a hard blow to the separatists and their sponsors.

This new setback replaces the separatist front in its true dimension, that of an agent in the service of the Algerian junta.