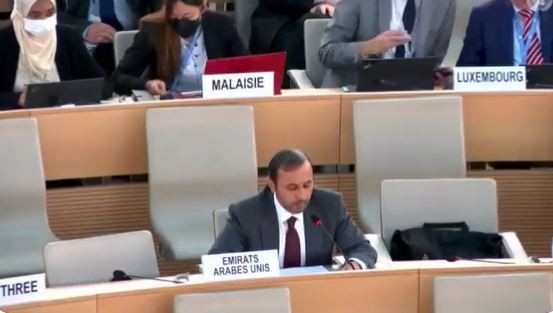 A group of some 40 States reaffirmed on Tuesday in Geneva strong support for Morocco’s territorial integrity and sovereignty over its entire Sahara territory, praising the Kingdom’s serious efforts made to reach a lasting and peaceful resolution to the Sahara regional conflict.

In a joint statement read out by the UAE Delegate at the ongoing 51st session of the UN Human Rights Council, the group said the Sahara issue is a political dispute currently handled by the Security Council which commends the autonomy initiative presented by Morocco as “credible and serious” for reaching a final political solution to this regional dispute.

The statement hailed the opening of consulates in the cities of Dakhla and Laayoune by several countries mostly from Africa and the Arab world, saying these diplomatic representations will contribute to strengthening economic cooperation & investment for the benefit of local populations and will spur regional development.

The Support Group for Morocco’s territorial integrity welcomed the efforts made by new UN Sahara envoy Staffan De Mistura in a bid to re-launch the UN-led political process on the basis of the round-table format in accordance with UN Security Council resolutions 2602 of 2021, calling for a political, realistic, pragmatic, lasting solution to the Sahara issue.

The group affirmed that Morocco has been engaged for many years in a constructive and voluntary interaction with the UN human rights system, in particular OHCHR for the promotion and respect of human rights throughout its territory.

The Security Council welcomes the role played by the national and regional Human Rights Commissions in Dakhla and Laayoune and the positive interaction set between Morocco and the UN Human Rights Council, underlined the group’s statement.

North Africa Post's news desk is composed of journalists and editors, who are constantly working to provide new and accurate stories to NAP readers.
NEWER POSTKenya rescinds its recognition of pseudo-SADR, will end its presence in the country
OLDER POSTRenault to start making electric vehicles in Morocco plant in 2023