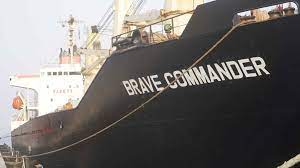 The first UN-chartered ship carrying Ukrainian grain to Africa since the flare up of the Russia-Ukraine conflict arrived in Djibouti on Tuesday (30 August) to be distributed in Ethiopia to help the drought-stricken nation cope with worsening hunger that threatens to become a famine.

“The food on the Brave Commander will feed 1.5 million people, for one month in Ethiopia,” Mike Dunford, East Africa regional director for the UN’s World Food Program (WFP) said. “So, this makes a very big impact, for those people who currently have nothing and now WFP will be able to provide them with their basic needs.”

Russian blockade of Ukraine’s seaports forced the East European country to halt nearly all deliveries of grain, which sparked concerns about a worldwide food crisis. The Black Sea Initiative, or a settlement between Kyiv and Moscow that was mediated by the UN and Turkey in July, saw a subsequent resumption in exports of wheat, other foodstuffs, and fertilizers from three Black Sea ports.

The WFP said 150,000 tons of additional wheat grain from Ukraine will be delivered to Ethiopia in the coming weeks thanks to US funding. The Black Sea Initiative is a step toward easing the dire situation of about 17 million people in landlocked Ethiopia who are in need of humanitarian assistance as the Horn of Africa endures another year of drought. Still there are concerns the resumption of exports from Ukraine may not be enough to make a dent in the crisis. Humanitarian organizations say parts of Ethiopia’s northern Tigray region may be in a state of famine, because of the conflict there that has displaced more than 5 million people and a de facto humanitarian blockade imposed by Ethiopia’s federal government.