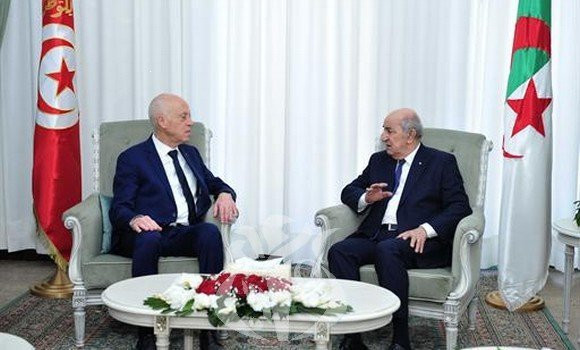 The unilateral invitation by Tunisian president to polisario chief and Algerian proxy Brahim Ghali continues to spill ink. Maghreb Intelligence reports that Tunisia’s president rolled the red carpet for the Polisairo leader in return for a promise to receive a meagre $200 million loan from Algiers.

President Kais Saied- who ironically often brags about defending Tunisia’s sovereignty during talks with international lenders- has turned his country to a vassal state depending on Algerian charity.

His provocation to Morocco by offering a presidential welcome reception to Polisario chief was denounced by Rabat which recalled its ambassador and decided not to attend the TICAD event in Tunis on Aug 27-28.

For $200 million only, President Saied sold decades of Tunisian neutrality on the Sahara issue and swims against the course of history, joining Algeria’s sinking ship.

Due to his power-grab and overturning of the democratic order that brought him to power, Saied lost credibility at home and support of global powers abroad with the US freezing its aid to Tunisia citing autocracy concerns.

Meanwhile, Tunisians continue to bear the brunt of failed policies as queues grow longer on fuel and foodstuff including basics such as flour, coffee, cooking oil, butter and sugar.

The $200 million could cover less than a month’s needs of hard currency to buy basics. The question is how will Tunisian President bow afterwards to his new Algerian paymasters?

Oil and gas dependent Algeria might have staved off on the short term an economic collapse due to a flush of cash on the back of rising prices. But on the long term, its model of subsisting on hydrocarbon sales is due to come to an end as the world shifts to clean energy.

Algeria has nothing to offer but a small portion of cash on the condition that Tunisia abdicates its foreign policy to sideline with Algiers on its erratic stands.