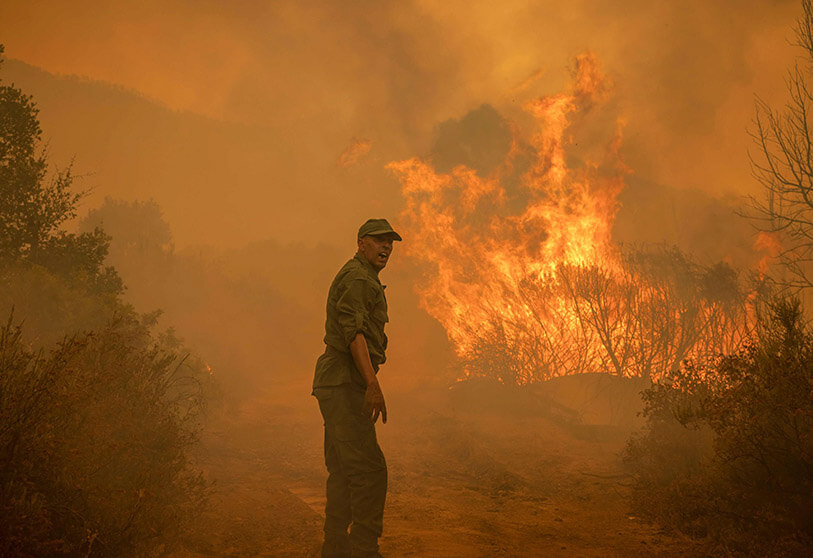 Three Moroccan firefighters died in a car accident while on duty countering wildfires in the “Kodiat Tifour” forest, near the city of M’diq, in the country’s north.

Their vehicle plunged into a ravine while they were fighting the fire. Two of their colleagues were injured.

In a related development, the judicial police brigade of the M’diq-Fnideq prefecture said it arrested on Monday four people on suspicion of deliberately starting the fire and causing property losses in a public forest estate.

The suspects, aged between 20 and 30, were arrested following investigations and security operations conducted after the fire broke out in the “Kodiat Tifour” forest.

Preliminary investigations showed that the suspects were present at the scene of the fire and that they started the fire in this forest area. Investigations are carried on to determine whether this act had criminal motives or was a mere accident.

Morocco, like many other Mediterranean countries, has been hit this summer by blazes that ravaged thousands of hectares, amid severe drought.

Most major wild fires that broke out in July have been controlled within days as Morocco deployed its water bombers as well as consequential human resources from the civil protection and the army.

The government earmarked 29 million dollars in aid to affected rural populations whose homes and farms were ravaged by the recent blazes.

The wildfires that sparked in July destroyed more than 10,000 hectares and destroyed thousands of cattle as well as some villages.

North Africa Post's news desk is composed of journalists and editors, who are constantly working to provide new and accurate stories to NAP readers.
NEWER POSTU.S.-Morocco-Israel Alliance Vs Iran-Algeria Axis
OLDER POSTEU increases aid to Morocco for struggle against illegal immigration by 50%