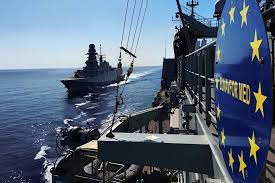 The multinational operation stopped the ship and inspections revealed that the vessel was carrying dozens of vehicles designed or modified for military use.

It left the Jordanian port of Aqaba and was heading to Libya. IRINI diverted the ship to Marseille, France, to offload the cargo before leaving the port on August 2 to resume its commercial activities.

MV Victory RORO has been on the radar of the UN Panel of Experts on Libya after it allegedly delivered military vehicles to the eastern part of the oil-rich country in early March.

Libya has been under UN embargo since 2011. The eastern part of the country is controlled by warlord Khalifa Haftar. Libya currently has two administrations respectively headquartered in the coastal city of Sirte and capital Tripoli.