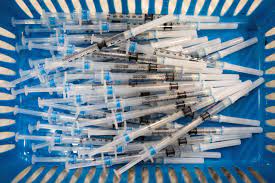 South Africa’s Aspen Pharmacare may soon be forced to halt its Covid-19 vaccine production as the overall demand, including government contracts for Covid-19 antivirals and vaccines, dry up.

Aspen currently produces vaccines for Johnson & Johnson and, in March, it struck a deal to produce, price, and sell its own-brand version of the shot for African markets. That deal was considered a game-changer for a continent frustrated by sluggish Western handouts. But, while only a fifth of adults in Africa are fully vaccinated, according to experts, demand for shots have failed to materialize. Without any new orders it could be forced to pivot to manufacturing other products, Stavros Nicolaou, Aspen Group Senior Executive, said on Wednesday August 10.

The bulk of the company’s Covid-19 production lines was designed to produce Aspenovax for Africa. Its initial plans aimed to boost annual capacity to 700 million doses by February and a further expansion to one billion doses to meet expected demand. But, according to Nicolaou, Aspen has had no orders for its Aspenovax vaccine, and it is not possible to predict future J&J demand, leaving the future of its 450-million-dose annual production capacity in doubt.

“This year, final quantities and delivery schedules for our vaccine are geared to the evolving needs of countries, depending on their vaccination needs and their capacity to absorb vaccines at different points in time,” J&J told the media.

North Africa Post's news desk is composed of journalists and editors, who are constantly working to provide new and accurate stories to NAP readers.
NEWER POSTLNG traders hit with huge losses due to LNG plants disruptions in Nigeria, US and Australia
OLDER POSTMali receives more military aircraft from Russia