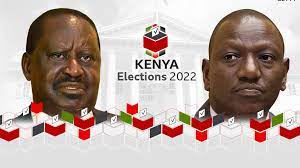 Polls for presidential, legislative and local elections closed across Kenya on Tuesday (9 August), and it appears Kenyans voted largely peacefully as two political heavyweights battled it out in a high-stakes race for the presidency of the East African powerhouse.

The country is hoping for an orderly transition of power after almost a decade under two-term President Uhuru Kenyatta, but concerns about vote-rigging linger after the 2007 election disputes spiraled into bloodshed.

Across Kenya, voters lined up to cast their ballots in what has been billed as a key test for democracy in a country where ordinary people have increasingly become disenchanted with the political elite. Many hope the new leadership could improve their lives, as they struggle to put food on the table amid soaring inflation and with millions going hungry because of a crippling drought.

Both Ruto and Odinga have urged a peaceful election, but fears remain that if the loser challenges the outcome — as widely expected — there could be unrest. Security has been tight, with more than 150,000 officers deployed across the country of about 50 million. The electoral commission has seven days to announce the presidential vote winner. The president-elect must get a 50% vote to take charge of the government and the country’s affairs.