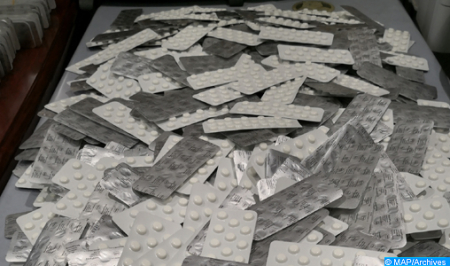 Police operating at the Tangier-Med port zone have foiled, Tuesday, an international trafficking attempt of 17,970 “Rivotril” psychotropic tablets, said a statement by the national police (DGSN).

The operation was conducted on the basis of accurate information provided by the Directorate General of Territorial Surveillance (DGST).

The psychotropic tablets were seized during a control operation on board a truck registered in Morocco, immediately after its arrival from a Spanish port, according to the statement, which said that the cargo was carefully hidden inside cavities of the trailer that was loaded with imported electronic equipment.

The search and investigation procedures have also led to the arrest of the trucker, a Moroccan aged 37 years, who was placed in custody to complete the investigation to determine the local and international ramifications of this criminal activity, said the DGST.