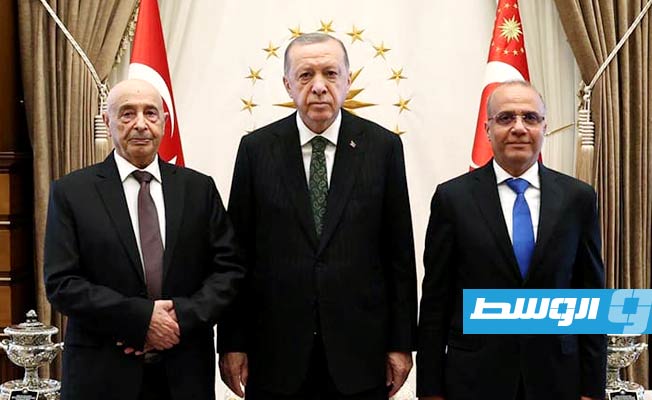 Turkish President Recep Tayyip Erdogan, Tuesday, met up in Ankara with Speaker of the House of Representatives, Aqila Saleh, and member of the Presidential Council, Abdullah Al-Lafi to discuss the situation in Libya where Turkey wields a sway.

Al-Lafi on Twitter said the meeting with the Turkish President dealt with political developments, noting that the views agreed on preserving Libya’s unity, expediting the holding of elections, through one strong government, and emphasizing the exclusion of a military solution, Libya Update reports.

Saleh travelled to Turkey Monday to seek rapprochement with Ankara to break the political deadlock in the oil-rich country which currently has two rival governments.

The HoR removed Dbeibeh in February and replaced him with Bashagha.
Saleh, on July 20 told Al-Massar TV, that “politics are flexible and subject to development and change, there is no permanent rivalry,” and that “the interests of the Turks are linked to our interests.”

North Africa Post's news desk is composed of journalists and editors, who are constantly working to provide new and accurate stories to NAP readers.
NEWER POSTEthiopia crisis: US, EU urge govt. to restore services in conflict-torn Tigray
OLDER POSTTunisia’s Electoral Commission to sue any attack of fraud in connection with July 25 referendum