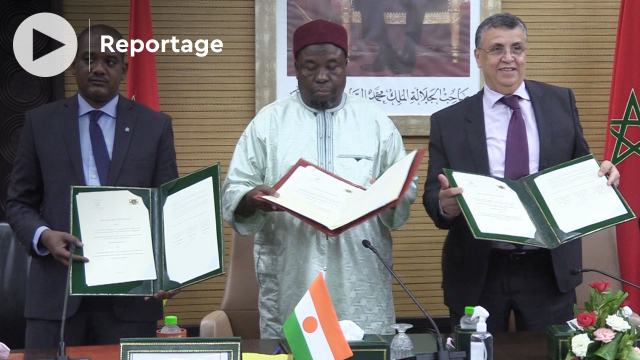 Morocco and Niger have agreed to strengthen cooperation and exchange experiences in the fight against human trafficking, a serious crime and a grave violation of human rights.

The agreement was sealed Monday in Rabat on the occasion of the World Day against Trafficking in Persons.

Speaking during the signing ceremony, Moroccan Justice minister Abdellatif Ouahbi stressed the importance of the anti-trafficking law passed in 2016 within the framework of a comprehensive and inclusive strategy developed by the North African Kingdom to combat illegal migration and smugglers of people.

For his part, Moumouni Hamidou, Head of Niger’s National Coordination Commission against trafficking in Persons, said his country looks forward to benefiting from Morocco’s experience accumulated in this area within the frame of the inter-African cooperation and solidarity against common challenges.

According to UN, every year, thousands of men, women and children fall into the hands of traffickers who view their victims as commodities that can be used and sold for financial gain, without regard for human dignity and rights.

Dismantling smuggling networks and the protection of migrants require close collaboration between countries of origin, transit and destination. It also requires enhanced regional and international judicial cooperation to facilitate the exchange of information between law enforcement agencies, confiscate the proceeds of the traffickers, allow their extradition and ensure the safe return & the restitution of the rights of the victims.

Female victims continue to be particularly affected by trafficking in persons as for every 10 victims detected globally, about five were adult women and two were girls. About one third of the overall detected victims were children, both girls and boys, while 20 per cent were adult men.