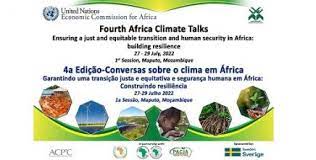 The all-important 4th edition of the Africa Climate Talks (ACTs!) was held in in Maputo, Mozambique under the theme “Ensuring a just and equitable transition and human security in Africa: building resilience.”

African nations gathered for the climate talks this July 27-29 to identify their priorities and come up with a common position ahead of the United Nations climate summit, known as COP27, in Egypt in November. Convened as hybrid in-person and virtual participation, ACTs 2022 was co-hosted by the Economic Commission for Africa (ECA) and Eduardo Mondlane University, with the participation of other UN Agencies, the Africa Union Commission, African Development Bank, and the Pan-African Climate Justice Alliance (PACJA).

ACTs! 2022 comes against the backdrop of more frequent and severe weather events, including unprecedented droughts, cyclones and tropical storms in East and Southern Africa. The West Indian Ocean region in particular has suffered considerable damage and losses from weather and climate related events. The continent of 1.2 billion people, which represents 17% of the world’s population, contributes less than 4% of global greenhouse gas emissions but suffers mightily from extreme weather events, which scientists have warned will become more frequent due to climate change.
Officials were expected to decide whether to ask nations for reparations for environmental damage in Africa, known in climate circles as loss and damage. African nations already spend between 2% and 9% of their national income on natural disasters linked to climate change, according to the UN estimates. The forum focused on using Indigenous knowledge and land practices for conservation and adaption efforts, rather than relying on external help, said Jean-Paul Adam, the head of climate at the United Nations Economic Commission for Africa. The talks include policy makers and regional institutions as well as grassroots activists and representatives from private sector.