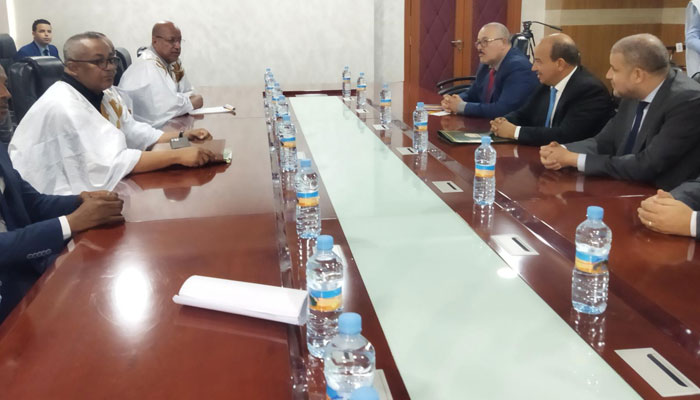 Towards the creation of a Moroccan-Mauritanian parliamentary economic forum

The Speaker of the upper house of the Moroccan parliament, Naama Mayara, stressed from Nouakchott that the promotion of trade is a real avenue for strengthening distinguished relations between Morocco and Mauritania and suggested he setting up of a parliamentary economic forum.

The proposal was made during a meeting Sunday with parliamentary groups at the Mauritanian National Assembly.

The participating Mauritanian deputies welcomed the proposal and called for speeding up the establishment of the parliamentary economic forum.

During the meeting, Mayara specified that parliamentary cooperation between the two countries’ legislative institutions should not be limited to the exchange of expertise and experience and the coordination of positions at the level of regional and international fora, but it must cover well-targeted economic and social programs in both countries.

He explained that the objective is to achieve a genuine economic integration between the two countries. The establishment of a Moroccan-Mauritanian Parliamentary Economic Forum would be a real opportunity to highlight the potential of the Kingdom and Mauritania to attract more capital and expertise and, therefore, promote the Moroccan and Mauritanian economies with the objective of facing future challenges, he said.

He noted that among the challenges that require more cohesion and the establishment of a strong economy, is the problem of food security, which threatens the Sahel and Sahara region, caused by the Russian-Ukrainian crisis, as well as the difficulties related to health security and the growing phenomenon of illegal immigration.

Naama Mayara was on an official working visit to Mauritania at the head of a large parliamentary delegation at the invitation of Speaker of the Mauritanian National Assembly, Cheikh Ould Bayeh.

The objective of this visit is to consolidate institutional and parliamentary cooperation between the Chamber of Councilors and the Mauritanian National Assembly, to exchange views and strengthen coordination between the two parties, as well as to examine means of deepening bilateral relations capable of taking up the various challenges which are essential on the regional and international scene and which relate in particular to security, stability and sustainable development.