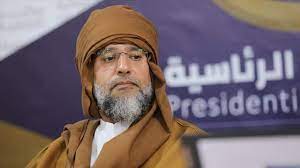 Saif al-Islam Gaddafi’s lawyer announced on Tuesday that his client had proposed an initiative to solve the political crisis in Libya, calling on all political figures to withdraw from the arena and to hold presidential and parliamentary elections that would produce new faces chosen by the Libyan people

Al-Zaydi, in an interview with Al-Arabiya channel, revealed that Saif’s initiative had two components.

The first proposes that a neutral party makes administrative and legal arrangements for the implementation of urgent, non-exclusive presidential and parliamentary elections in which everyone participates.

The second recommends “the withdrawal of the current political figures from the electoral process collectively without exception and making way for new personalities and faces chosen by the Libyan people through transparent elections, as a last attempt for a peaceful solution.”

Libya currently has two rival governments backed by foreign entities, sliding the country further into deep crisis. The oil-rich North African country has never been able to restore order since the fall of Gaddafi in 2011 in a NATO-led revolution.

Saif was expected to run for December 24 botched elections. His candidacy was first rejected over crime allegations but was later reinstated.

The International Criminal Court (ICC) wanting him for crimes committed during the uprising against his father condemned the candidacy.