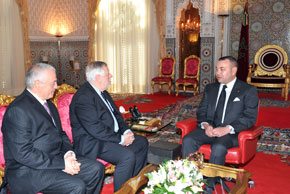 King Mohammed VI has sent on Saturday a message of condolences and compassion to the family and friends of late French anthropologist Yves Coppens, who was member of the Hassan II Academy of Sciences and Techniques.

In his message, the King said he learned with emotion the passing of the renowned pundit in paleontology and prehistory, who worked throughout his career to make the history of Man accessible to the general public.

The Sovereign expressed his deepest condolences and feelings of compassion to the family, relatives, and friends of the late Professor Yves Coppens.

“An eminent member of the Hassan II Academy of Sciences and Techniques, he always made contributions imbued with profound wisdom,” stated the King.

The Sovereign said he particularly remembers his meeting with Coppens, during one of his visits to Morocco, adding that he has been impressed by “the elegance of the soul of this academic who had a lot of affection for humanity.”

Yves Coppens passed away on Wednesday at the age of 87. He was specialized in the study of ancient hominids. He published numerous academic works and produced a film titled “A Species Odyssey.”

Renowned globally as a revered expert in his field, Coppens received four honorary doctorates from universities in North America and Europe, and has had an asteroid named in his honor.

Among his most famous achievements, Yves Coppens was part of the team that discovered the fossil of “Lucy” in 1974. The fossil was dated to over 3 million years ago and is considered a big piece of evidence in support of evolution.