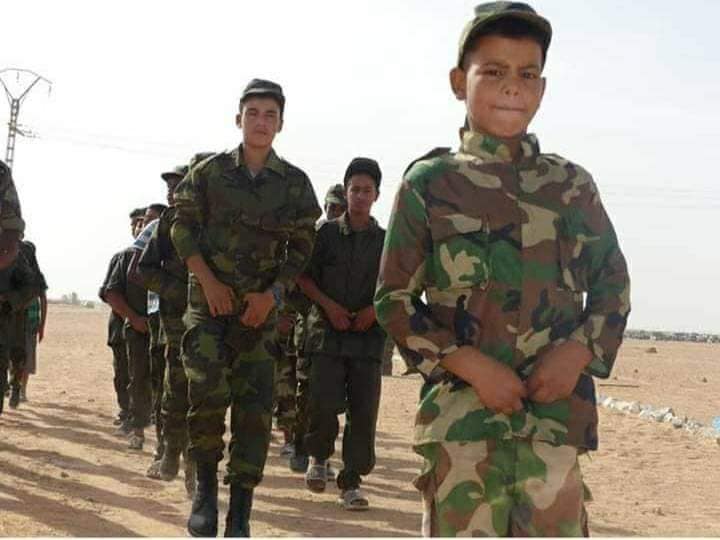 As the recruitment and exploitation of children in crises and political conflicts is a war crime under international humanitarian law.
As the recruitment and exploitation of children in conflicts is a violation of the essence of the International Convention on the Rights of the Child and its annexed protocols and it requires no impunity.
As the crime of exploiting children and recruiting them in armed conflicts requires international condemnation and intolerance with these violations that threaten the lives of children and violate their basic rights.
We draw your attention and international public opinion to the involvement of the Algerian state as being responsible for what happens in the Tindouf camps, along with the Polisario, in the crime of recruitment and exploitation of children in the Western Sahara conflict.
As it has been proven to us by conclusive evidence that children are continuously and obligatory subjected to military training inside the Tindouf camps and are used as soldiers inside these camps, which makes them vulnerable to all forms of violations related to this crime, and in complete silence by the Algerian state as it is the first responsible before the United Nations for any violations committed in or outside the Tindouf camps, which are located on its territory.
Thus, the Polisario and Algeria share the responsibility for violating all international references that frame the protection of children’s rights, and they clearly violate all resolutions of the Security Council in this regard.
Based on our responsibility as a coalition to protect the rights of the child and expose those responsible for involvement in this crime, whether countries, groups or individuals:
• We denounce the practices committed by the Polisario and Algeria against children in refugee camps
• We reject the exploitation of Sahrawi children and their recruitment into the Western Sahara conflict
• We call on the international community not to remain silent about the condemnation of Algeria and the Polisario, and to ensure that those responsible for recruiting children in the camps do not go unpunished.
• We call on the Algerian state to fulfill all its international obligations towards the residents of the camps and to ensure that children enjoy their right to education and a comfortable family life.
• We call on the UNHCR in Tindouf camps to take all preventive measures to protect Sahrawi children from exploitation and recruitment military activities.
(Written by Réseau Unité pour le Développement de Mauritanie, a non-governmental organization in special consultative status)