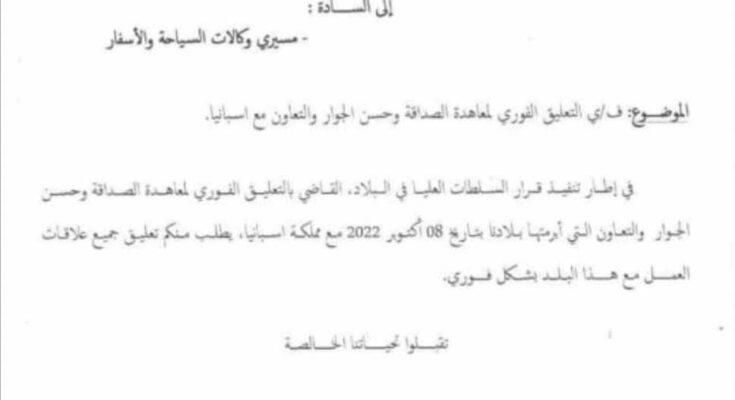 Anger is still boiling up inside the Algerian regime, irked by the firm support voiced by Spanish government to the autonomy plan offered by Morocco for the Sahara under its sovereignty.

Among the latest vindictive measures taken against Madrid, the Algerian Ministry of Tourism has ordered Algerian travel agencies to stop all collaboration with their Spanish counterparts and cancel all flights scheduled between the two countries in a new escalation against Madrid.

The ministry says the move has been taken in accordance with the decision of the country’s highest authorities to suspend the Friendship Treaty with Spain over the Sahara issue row.

The new Algerian hostile move comes following the announcement of the organization of the 1st Moroccan-Spanish Business Forum in the Moroccan Sahara city of Dakhla this June 21-22.

The meeting aims to consolidate Moroccan-Spanish economic relations, promote the economy of the Saharan region and showcase its huge investment opportunities to Spanish businessmen.

On June 11, EU Foreign policy Chief Josep Borrell and Executive Vice-Pdt of European Commission, Valdis Dombrovskis, have voiced concern over Algeria’s unilateral decision to suspend the friendship treaty with Spain, saying halting transactions with Madrid is a “violation of the EU-Algeria Association Agreement, in particular in the area of trade and investment”.

The EU has warned against discriminatory treatment of an EU Member State, saying it is “ready to stand up against any type of coercive measures” targeting one of the members of the Union.