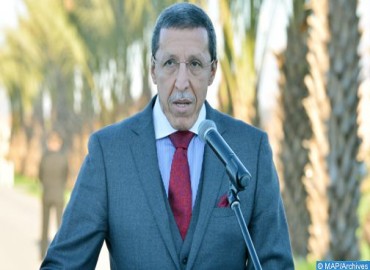 Morocco has reiterated, Thursday in New York, its “unwavering” commitment to peace, security and prosperity in the Middle East.

This came in a presentation by Morocco’s Permanent Representative to the United Nations, Omar Hilale, at a panel held as part of the World Conference 2022 of the American Jewish Committee (AJC) under the theme ”Winds of Change: The New Middle East”.

Hilale stressed that the Kingdom remains faithful and guided by the commitments contained in the Tripartite Declaration, signed on December 22, 2020 in Rabat, in the presence of King Mohammed VI, between Morocco, the United States and Israel.

In this regard, he stressed that this historic step constitutes a continuum, and by no means a beginning, of the depth and excellence of relations between Morocco, the United States and Israel.

The ambassador highlighted the progress, initiatives and projects launched in Morocco to ensure a cross-cutting commitment of all stakeholders in Moroccan society (government departments, universities, business community, civil society actors) to the new opportunities offered by the Abraham Accords. He recalled in this connection the numerous official visits of Israeli officials to Morocco, the signing of multiple MoUs, the holding of political consultations as well as educational and cultural exchanges that took place between the two countries.

Hilale stressed further the “indispensable” role of the United States to give a concrete impetus to the Abraham Accords, explaining that through the establishment of flexible and effective cooperation mechanisms, there will be more opportunities to increase trade and investment, build capacity and consolidate the sharing of best practices.

The diplomat also reiterated Morocco’s full readiness to continue its efforts to create the conditions for the parties to the Israeli-Palestinian conflict to return to the negotiating table. The resumption of negotiations between the Israelis and the Palestinians will give momentum to peace in the Middle East, he insisted.

On the eve of this world conference that was attended by the permanent representatives of Bahrain, the United Arab Emirates and Israel, the Moroccan diplomat hosted a dinner in honor of the members of the Board of Directors of the American Jewish Committee.

During this dinner, AJC leaders praised the leadership of King Mohammed VI and the Kingdom’s actions in promoting interfaith and intercultural dialogue, mutual respect, social coexistence and the fight against hate speech.

They also commended the Sovereign for his leading role in protecting and safeguarding the Moroccan Jewish heritage and promoting the values of dialogue between religions and cultures, with particular reference to Bayt Dakira in Essaouira and the Mohammed VI Institute for the Training of Imams, Morchidines and Morchidates.

North Africa Post's news desk is composed of journalists and editors, who are constantly working to provide new and accurate stories to NAP readers.
NEWER POSTEuropean Court calls on Moscow to halt execution of Moroccan captured in Dontesk
OLDER POSTPromotion and Protection of the Rights of the Child in Conflict Zones: Situation of Child Soldiers