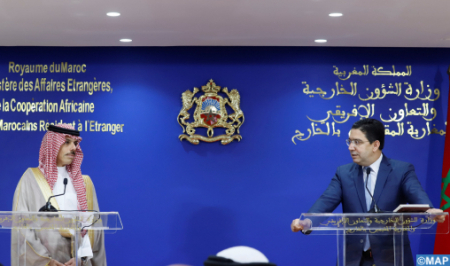 Riyadh reiterates unwavering support to Morocco’s sovereignty over its Sahara

Saudi Arabia reiterated Thursday its firm supportive stand to Morocco’s territorial integrity and sovereignty over its Sahara on the occasion of the 13th session of the Moroccan-Saudi Joint Commission convened in Rabat.

The Saudi government also voiced strong backing to the autonomy plan offered by Morocco to the Sahara under its sovereignty, describing the Moroccan proposition as a realistic and pragmatic political solution in line with international law and the resolutions of the Security Council and the UN General Assembly.

Furthermore, Riyadh said it opposes any attempt undermining the supreme interests of the North African Kingdom, its sovereignty, or the unity of its national territory.

Saudi Arabia also commended Morocco’s efforts to defend the Palestinian cause, hailing the continuous efforts made by King Mohammed VI, Chairman of the Al-Quds, aimed at defending the city of Al-Quds Al-Sharif and its inhabitants, preserving its civilizational identity and protecting its status as a symbol of tolerance and coexistence between different monotheistic religions.

During the joint commission debates, the two sides vowed to boost their cooperation and consolidate their ties, emphasizing the importance of partnership between the two countries.

In 2021, the overall value of trade between the two countries reached $1.76 billion. Some 250 Saudi-owned companies are based in Morocco, while fewer than 20 Moroccan companies are present in Saudi Arabia.

Saudi direct investments in the North African country stood at $26.6 million in 2020. The investments were injected in several industries, including real estate, tourism, and agriculture.