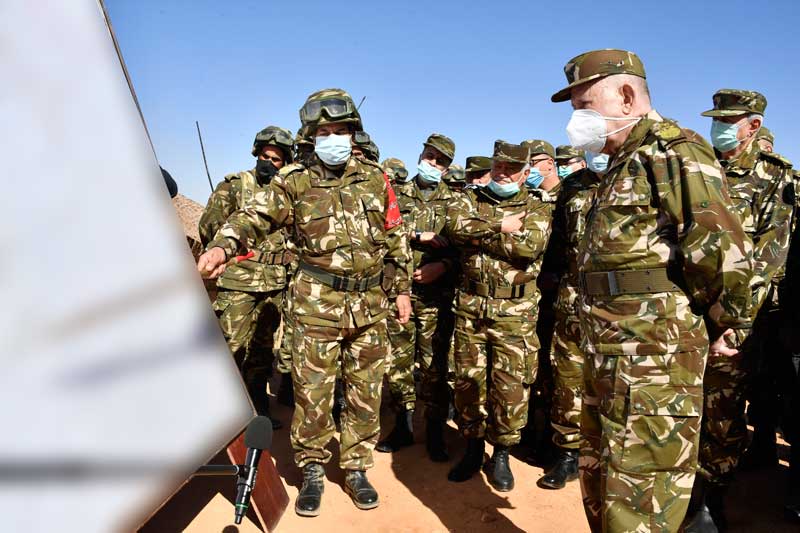 To give vent to their frustrations, growing anxiety and setbacks, Algerian Army chief General Said Chanegriha and his corrupt geriatric Generals have carried air-land manoeuvres with live ammunition in Tindouf, Southern Algeria, near borders with Morocco.

Tanks, all-terrain military vehicles, helicopters, fighter jets and tanker aircraft have all been used by the Algerian Army in its night drills supervised by Chengriha.

In a speech made on this occasion, Gen. Chengriha told his troops that sophisticated weapons do not make an army much more powerful, noting that military strength lies in the psychological and physical capacities of soldiers. A statement suggesting that the morale of Algerian army is hitting rock-bottom.

According to some analysts, the Algerian junta’s decision to hold this military exercise few days before the African Lion (AL22) shows the deep apprehension of the Algerian top brass as the African Lion military maneuvers, spearheaded by the U.S. and Morocco, will take place in parts of Moroccan Sahara, reaffirming the American and international recognition of the Moroccanness of the Sahara.

African Lion is a critical component for the U.S.-Morocco security partnership. Morocco is a major non-NATO ally, and the country’s strategic location makes it a gateway to Africa.

Morocco is the U.S. strong and stable partner in North Africa. In 2020, the two countries renewed their long-standing alliance as a foundation stone for peace in Africa.

According to US-Africa Command, thousands of troops from the North and South America, Europe, and across Africa will participate in AL-22 featuring a multi-national combined joint task force command post exercise; a combined arms live-fire exercise; a maritime exercise; an air exercise with U.S. C-130J Super Hercules, KC-135 Stratotanker and bomber aircraft.

The training also includes a joint forcible entry with paratroopers into a field training exercise; a chemical, biological, radiological & nuclear response exercise; as well as humanitarian and medical missions.