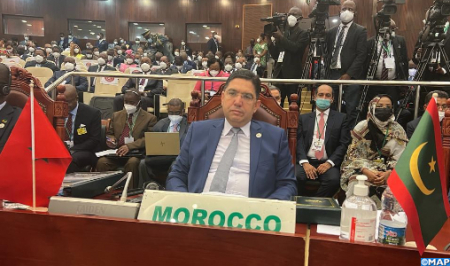 Morocco’s Foreign minister Nasser Bourita, represents King Mohammed VI in the two Extraordinary Summits of the African Union (AU) on humanitarian issues in the Continent and on terrorism & unconstitutional changes in Africa, scheduled Friday and Saturday in Malabo, Equatorial Guinea.

The Summit on Humanitarian crises opened Friday, while that focusing on the fight against terrorism and military coups will start works Saturday.

The African leaders meet as the Continent is facing several security, health, food shortage and climate change challenges, in addition to armed conflicts, growing humanitarian difficulties exacerbated by the socio-economic impact of the COVID-19 pandemic and the Russian-Ukrainian war.

According to the AU, at least 15 African countries need urgent aid. With climate changes and armed conflicts spreading in Africa, the need for humanitarian assistance will become much more crucial, while the Russia-Ukraine conflict has escalated a food crisis

Of the more than 30 million internally displaced Africans, more than 10 million are children aged under 15, said the AU. The UN Food and Agriculture Organization says around 282 million of Africa’s 1.4 billion inhabitants are under-fed – an increase of 49 million compared to 2019.

Addressing the AU Executive Council ahead of the summits, AU Commission Chairperson Moussa Faki Mahamat said: “From Libya in North Africa, to Mozambique in Southern Africa, from Mali in West Africa, to Somalia in the Horn of Africa, across the Sahel, the Lake Chad basin, down to the east of the DRC in Central Africa, terrorism continues to spread a deadly web with considerable consequences on finances, economies and people’s safety.”

He also tackled the political situation and insecurity in Africa, saying that the military coups in Africa marked a “regression” in the democratic process.

“The transition deadlines put in place in the aftermath of the unconstitutional changes have become sources of dissension and sometimes tensions that are detrimental to the stability of the states concerned and that of their neighboring countries”, underlined the AU Commission chief.

North Africa Post's news desk is composed of journalists and editors, who are constantly working to provide new and accurate stories to NAP readers.
NEWER POSTMorocco elected to WHO executive board for 2022-2025
OLDER POSTMorocco, Tunisia, Japan pool efforts to valorize bio-resources