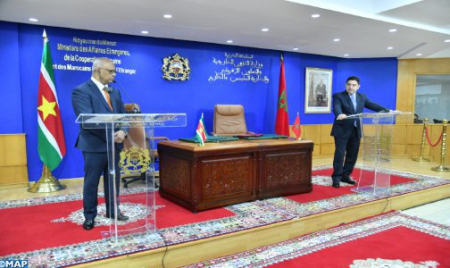 Suriname has expressed full support to the Morocco-proposed autonomy plan for the Sahara as the unique basis for a political solution to the regional dispute and announced its decision to open a Consulate General in the city of Dakhla.

The remarks were made by Surinamese Foreign Minister Albert Ramdin in Rabat on Wednesday during a joint press briefing with his Moroccan peer Nasser bourita.

He also announced the opening of his country’s embassy in Rabat, pointing out that the opening of these two diplomatic representations of Suriname in Morocco will be two mechanisms to consolidate cooperation between the two countries and give a new dynamic to bilateral relations.

In a joint statement issued after the talks between the two Foreign Ministers, Albert Ramdin reaffirmed the recognition by the Republic of Suriname of Morocco’s sovereignty over all its territory, including the Moroccan Sahara, and expressed full support to the Moroccan autonomy plan as the only basis for a political solution to the regional dispute over the Moroccan Sahara, in full respect of the territorial integrity and national sovereignty of Morocco.

During these talks, Bourita informed Ramdin of the latest developments on the Sahara issue and stressed the support of the international community to the Moroccan autonomy plan under the sovereignty of Morocco, as the only basis for a consensual political solution to this regional dispute.

The Moroccan official reiterated, in this regard, Morocco’s commitment to the ongoing political process conducted under the exclusive auspices of the United Nations.

Suriname’s position on the Sahara issue is part of a support wave for the national cause expressed by several countries around the world, especially in the Caribbean region. A total of 12 countries out of 14 in this region have changed their positions in favor of Morocco on the Sahara issue.

the inauguration of the general consulate of suriname is slated for thursday, may 26.