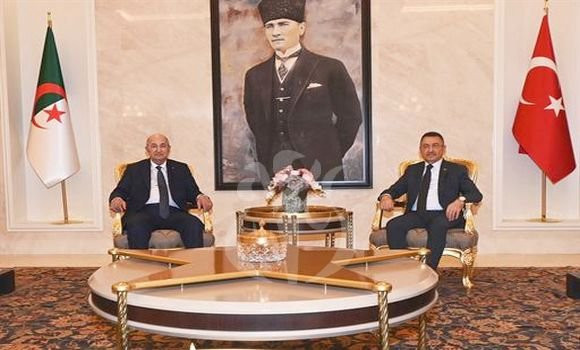 The civilian façade of the military regime in Algeria, President Abdelmedjid Tebboune, ended a state visit to Turkey empty handed, save the signing of MOUs with a vague language and promises that remain ink on paper, at a time the North African country is desperately seeking alternatives to deal with a looming halt of Russian arms supplies.

Analysts say the visit comes at a particular context Algerian diplomacy feels isolated as its main arms supplier is mired in the Ukrainian quagmire and hence unable to keep the same pace of arms supplies.

Among the empty promises cited by Algerian media are Turkish vows to step up defense cooperation including in the field of industry. Though no concrete agreement was signed.

This Algerian rush to secure defense alliances or promises shows the scale of disarray within the army institution which rules the country amidst fears of a halt of Russian arms supply.

With Putin’s plan for a blitzkrieg failing, Russia seems to be stuck in a protracted conflict in Ukraine. This means Russia’s war effort will have an impact on Russia’s arms industry for years to come undermining its export capabilities.

The specter of sanctions is also haunting countries like Algeria that rely extensively on Russian weapons and the problem of receiving Russian technicians and engineers for maintenance works is a real problem now with all the restriction, reputational damage that countries that transact with Moscow now face.

The west is taking this war seriously. It has already waged an economic war that crippled the Russian economy and the economy of its Belorrusian ally. Sanctions may extend to preventing countries from using the dollar to buy Russian arms.

Countries that rely on Russian arms could also be denied access to the Western arms market.