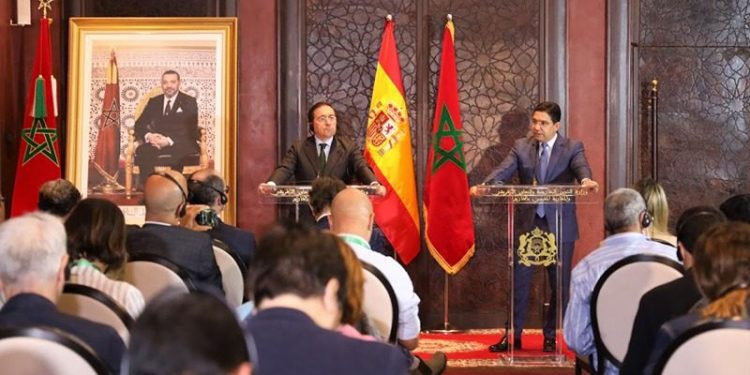 Spanish foreign minister José Manuel Albares has affirmed that his country stands with Morocco in the fight against terrorism which is threatening the region’s peace and stability.

Speaking to journalists following talks held Tuesday in Marrakesh with Moroccan peer Nasser Bourita on the sidelines of the meeting of the Global Coalition against ISIS, Mr. Albares underlined the firm the commitment of both countries to combat terror, affirming that cooperation between the two countries guarantees security and prosperity to both peoples.

According to the Spanish top diplomat, past crises and tensions between the two countries “have no place in this stage.” “And whatever we do, we have to think about the interests of both countries,” he underlined, reaffirming at the same time Spain’s unwavering support for the Moroccan autonomy proposal for the Sahara Provinces.

He insisted that the autonomy proposal is now and more than ever, the “most serious” and “most realistic” way for a definitive settlement of the Sahara issue.

Commenting on Madrid’s supportive stand of the autonomy plan offered for the Sahara, Nasser Bourita said it is part of an international dynamic gaining momentum to settle the Sahara regional conflict.

Morocco “welcomes the Spanish position which is in line with the vision and stands of the UN Security Council, the international community, several European countries and most Arab and African countries”, said Bourita.

“The parties which want to find a solution to this artificial conflict must engage in the only possible framework: the Moroccan autonomy initiative”, he stressed, affirming that “anyone who wants this conflict to continue is only interested in fueling instability in the region and perpetuating the sufferings of the detainees in the Tindouf camps.”

The situation which has lasted for 4 decades could still last if there is not a genuine mobilization to find a solution, warned the head of Moroccan diplomacy.

The two officials’ meeting that lasted for more than an hour reviewed all the subjects of interest to the two countries following the relaunch of all-out bilateral cooperation and partnership.

“We are in the process of reaping the fruits of the roadmap drawn up by King Mohammed VI and PM Pedro Sanchez,” Bourita said, recalling the recent meeting of the joint committee for the preparation of the Operation Marhaba 2022 and that of the Permanent Group on Migration.

Echoing him, José Manuel Albares said “this roadmap is our common reference and it is up to us to give it body and substance, by upgrading and further deepening our partnership.” The next high-level meeting scheduled before the end of this year between the two Kingdoms will be one of the highlights of the roadmap, he said.

“Spain is an ally of Europe. Your country can count on Morocco to consolidate bilateral cooperation as well as stability and peace in the region,” Bourita said, explaining that the purpose of cooperation between Morocco and Spain is to benefit both countries. “This cooperation is not against anyone,” he said.

Nasser Bourita also announced, during this conference, an upcoming meeting, scheduled for June, on the delimitation of the borders between the two countries, especially those at sea, in the Atlantic Ocean.

This was confirmed by the Spanish Foreign Minister who said: “We have also scheduled a large number of meetings and encounters, ranging from economic areas to those related to training, culture, sport, through the delimitation of our respective maritime and air spaces.”

“We are also determined to develop our economic and commercial partnership. Morocco is our main market outside the European Union. The North African Kingdom is our first supplier, but also our first customer”, insisted the Spanish Minister of Foreign Affairs.

He also touched on cooperation to fight illegal immigration, noting a drop of around 70% in illegal migratory flows from Morocco to the Canary Islands.

“The fight against illegal immigration is an essential subject of cooperation between our two countries. So is the fight against terrorism. My presence here in Marrakech as part of the meeting of the World Coalition against Daesh hosted by Morocco is the perfect illustration of this”, Jose Manuel Albares said.