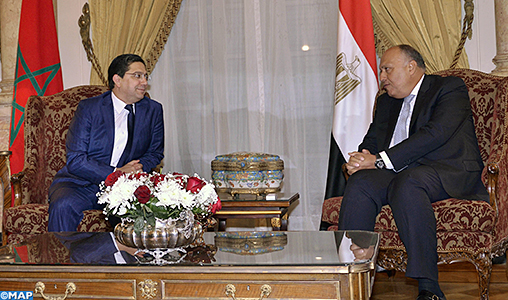 Egypt reiterated its position in support of Morocco’s territorial integrity and UN efforts in line with UN Security council resolution 2602 which stressed the preeminence of the autonomy plan.

This came in a joint statement following talks in Rabat between Moroccan and Egyptian foreign ministers, Nasser Bourita and Sameh Choukri.

The two countries expressed in the statement their willingness to boost cooperation at all levels, citing notably trade and investments.

They also called for bridging the gap between Arab countries and expressed rejections in any interferences in the domestic issues of Arab states.

Morocco also expressed support for Egypt’s water security and called for a halt of unilateral initiatives in managing shared rivers in line with international law.

They also reiterated support for the two-state solution to the Israeli-Palestinian conflict. Egypt commended the role by King Mohammed VI, Chairman of Al Quds committee, while Morocco lauded Egypt’s efforts to reach inter-Palestinian reconciliation and the reconstruction of the Gaza strip.

They both agreed about the need for an inter-Libyan dialogue free from foreign interferences and called for the departure of all mercenaries and foreign armed men from the North African country.

During his visit to Morocco, the Egyptian Foreign Minister inaugurated the new headquarters of Egypt’s embassy in Rabat.

North Africa Post's news desk is composed of journalists and editors, who are constantly working to provide new and accurate stories to NAP readers.
NEWER POSTMorocco launches digital platform compiling over 10,000 Hadiths
OLDER POSTActivities of Chair of African Literature & Arts launched at the Academy of the Kingdom of Morocco next week