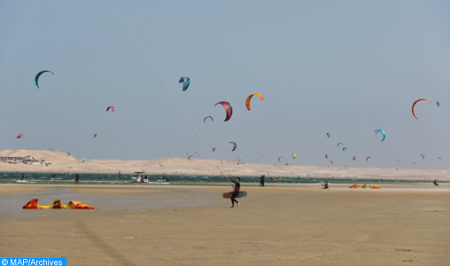 The Moroccan southern city of Dakhla has become over a twenty- year span a hotspot for kitesurfing, writes French magazine Paris Match, explaining the current trend by the city’s geographical position -30 kilometers north of the Tropic of Cancer, like Havana or Hawaii- which offers a pleasant climate all year round.

“In the southernmost part of Morocco, wedged between the Atlantic and the Sahara, the small peninsula offers an ideal setting to indulge in this trendy sport,” the magazine states in a reporting under the title “Morocco: Discover Dakhla, the Mecca of kitesurfing.”

This enclave, isolated from the rest of Morocco by the surrounding desert, lulled by winds that glide between the dunes and spin over a shallow sea and offering a mild temperature, has proven to be the perfect spot for kitesurfing.

In twenty years, kitesurfing has gained popularity among celebrities such as José Garcia, Barack Obama, John Kerry, Brad Pitt, Prince William, and Richard Branson, the biggest promoter of this sport among the jet-set who came in 2021 to try out the site of Dakhla.

The number of tourists in the city has now increased fourfold from 25,000 in 2010, the magazine states, adding that Dakhla is now aiming to attract 200,000 tourists with the end of the pandemic and the reopening of the Moroccan borders.

Dakhla is a spot of the future, and some people have understood this, observes the French weekly magazine.