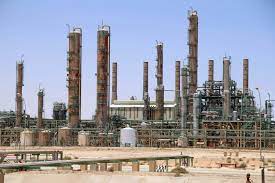 Libya: US calls for immediate end to oil shutdown as it harms Libyans & global economy

The United States expressed its “deep concern” over the continued oil closures in Libya, calling on “responsible leaders” to “recognize that the shutdown harms Libyans throughout the country and has repercussions across the global economy, and should end it immediately.”

In statement released on Wednesday, the US Embassy in Libya said that the closures are “depriving Libyans of substantial revenue, contributing to increasing prices, and could lead to electricity blackouts, water supply problems, and fuel shortages. The damage the shutdown is causing to oil infrastructure will cost Libya additional millions, risks an environmental disaster, and could impact the country’s ability to utilize this infrastructure in the future to reach its full production potential.”

Actually, Libya loses about half of its daily oil production because of the closure of oil fields and ports.

“The United States considers the shutdown of Libyan oil production to be a hasty response that hurts the Libyan people and undermines international confidence in Libya as a responsible actor in the global economy,” the statement added.

The US reminded Libyan leaders of the multiple Security Council resolutions that protect the National Oil Corporation and reiterated a commitment to working on a mechanism that would give the Libyan people confidence that the country’s revenues are being distributed for their benefit.

“Prior to the shutdown, the United States had recommended an incremental transfer of revenue subject to monitoring and oversight by a Libyan-led financial mechanism; however, Libyan leaders independently decided to make more substantial transfers,” the statement recalled.

The statement noted that the United States “advised and continues to advise the creation of a temporary Libyan financial mechanism with broad support to address how Libya’s revenues should be spent in the absence of an agreed national budget.”

Such a mechanism could be used by Libyan authorities to give the Libyan people confidence regarding how oil revenues from the National Oil Corporation would be used and to prevent the diversion of funds for partisan political purposes that could undermine Libya’s peace and security, the US embassy argued.

In another development, Government of National Stability Prime Minister Fathi Bashagha, appointed by the house of representatives, said that on Tuesday, he discussed with senior officials in Washington, efforts to conduct “transparent elections” in a timely manner.

“Today I continued my outreach to senior officials in Washington. We discussed efforts to hold timely and transparent elections and to establish economic and political security,” Bashagha wrote on his Twitter account.

“Collaboration and partnership with our allies will be essential as we move Libya forward”, he added.

This comes at a time of political crisis in Libya, with the House of Representatives assigning Bashagha to lead a new government and Government of National Unity Prime Minister Abdulhamid Dabeibah refusing to hand over power until after elections are held.