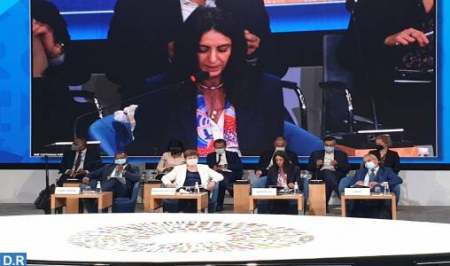 The Moroccan minister made the pressing appeal during the African Consultative Group meeting she co-chaired in Washington D.C. with Ms. Kristalina Georgieva, IMF Director at the 2022 WB-IMF spring meetings convened April 18-24.
Ms. Fettah sounded the alarm against the vulnerabilities of African countries due to their high debt, food insecurity, difficulties in adaptation to climate change and the war in Ukraine which triggered a surge in commodity, energy and food prices.

The statement issued following the African Consultative Group meeting stressed the need to protect the most vulnerable households from the impact of high food and energy prices, noting that the external shock is hitting the continent at a time when most countries have limited fiscal space, with high debt vulnerabilities and increased risks.

In this challenging context, targeted, temporary, and transparent support to vulnerable households using and further developing social safety nets would be the most appropriate solution, said the statement.

“For this effort to succeed, governments in the region, the international community, and the private sector should make concerted efforts to mobilize revenue and additional financing to support the recovery and implement needed reforms to promote inclusive and sustainable growth, achieve diversification, tackle the climate crisis, and transition to a green economy”, underlined the text.

The African Consultative Group underscored the need to address rising debt vulnerabilities of developing countries, particularly in Africa and find effective ways to alleviate the weight of the debt service. It also called to continue working together to strengthen the debt resolution architecture, including by improving the Common Framework for debt treatments and technical assistance within the Multipronged Approach (MPA).

During her participation in the WB-IMF Spring meeting, the Moroccan minister conferred with several top WB and Fund officials on Moroccan financial inclusion strategy, the success of vaccination campaign against covid-19 and efforts to stimulate the economy and mitigate the impact of the global crisis.
She also addressed the WB-IMF development committee. As chair of group of countries including Afghanistan, Algeria, Ghana, Iran, Pakistan and Tunisia, Ms. Fettah said: “We believe leveraging digitalization to promote strong and inclusive growth is no longer a choice, but rather a compelling need.”

She also called for urgent collective action to avoid the looming debt crisis in developing countries, urging the WB & IMF to deploy fast disbursing instruments that would provide immediate assistance to the countries burdened with debt.